Former Liverpool and Bayern Munich midfielder Xabi Alonso says that he cannot wait for Thiago Alcantara to return from injury.

Thiago made an exciting impression in his first two appearances since after signing from Bayern in September. Indeed, he was a pass master in the 2-0 win over Chelsea before adding flair in the 2-2 draw with Everton.

However, he suffered a nasty knee injury in the Merseyside derby, courtesy of a challenge from Richarlison. As such, he has missed the Reds‘ last eight games in their busy schedule.

But Alonso, who played with his fellow Spaniard in the Bundesliga for a stint, has expressed his excitement about the player Jurgen Klopp will soon have at his disposal again.

“I have loved watching Thiago Alcantara, the way he has been able to connect with the attacking players, helping to defend with his special qualities,” Alonso told UEFA’s official website (via the Daily Mirror).

“He’s a great friend, but above that, he’s become one of the best midfielders, and he’s a fabulous, intelligent, interesting, fun guy to be around in a training session and a dressing room.

“He loves football; he shows that with his personality and with the way he plays. He’s able to connect with his team-mates very easily.

“He’s done it fantastically at Bayern, and I feel that he’s going to do it in the same way at Liverpool, and I love it.” 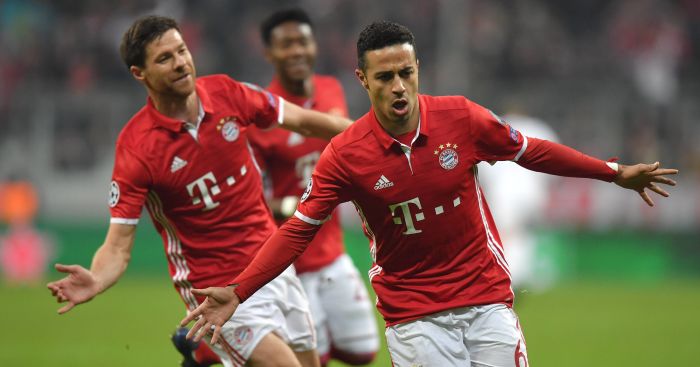 Liverpool boss Klopp admitted recently that he remains unsure on the timescale of the 29-year-old‘s return.

“I’m as surprised as the public. In the morning I come in, we have a medical meeting and they tell me ‘yes he is in, he is not’.

“I know it’s not too far anymore [for Thiago], but I have no idea [when he will be back].”

Thiago is one of several midfielders currently injured, but those problems pale in comparison to the Reds’ defensive scenario.

Indeed, first-choice pairing Virgil van Dijk and Joe Gomez out for the foreseeable future and the inexperience of youth shone through against Atalanta on Wednesday.