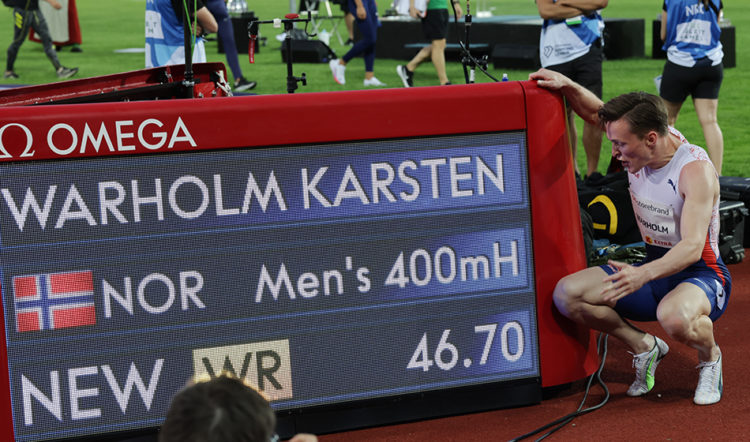 If recent weeks leading up to the Olympic Games in Tokyo are any indicator, then we are in for some superb track and field on the grandest stage of all in sport. Not one, not two, not three, but four world records have been broken by athletes making their final preparations or in qualifying for the pinnacle of competition.

Competing in her adopted homeland at a World Challenge meet, Hassan ran the 10,000m in 29:06.82. Just two days later, on the same track inside the Fanny Blankers-Koen Stadion in Hengelo, the Ethiopian Olympic Trials took place, however, and Letesenbet Gidey punched her ticket to Tokyo by running even faster.

Gidey, already the world record holder for the women’s 5000m, eclipsed Hassan’s time by over five-and-a-half seconds. The best-ever time for 10,000m is now a shade outside 29 minutes at 29:01.03. As with all other world records noted, the sport’s governing body World Athletics needs to ratify them, but Gidey v Hassan could be one of the clashes of the Olympics in this endurance test.

The US Olympic Trials are one of the fiercest national competitions in track and field. Held in Eugene, Oregon where next the World Athletics Championships take place, two world records were broken as athletes confirmed their places on the team for Tokyo. Defending men’s shot-put Olympic champ Ryan Crouser gained revenge on world champion Joe Kovacs in the field.

These two have been at the top of their event for some years, yet neither had thrown further than Randy Barnes’s 23.12m, a longstanding world record set back in 1990. More than 30 years on, however, Crouser won the US Trials by launching the shot out to 23.37m and wrapped up the national championship by over a metre.

On the track, meanwhile, Sydney McLaughlin previously had to settle for a silver medal in Doha behind compatriot Dalilah Muhammad in the women’s 400m hurdles at the 2019 World Athletics Championships. Muhammad set a world record of 52.16 out in the Middle East, yet the US Trials went to McLaughlin as she became the first woman to run inside 52 seconds.

She stormed home in 51.90, snatching the world record and beating her long-time rival by just over half-a-second. As with Crouser and Kovacs in the shot put and many other Olympic track and field events, the USA has athletes who are pushing each other to excellence. It’s precisely that reason why America is red-hot 1.10 favourites with Betway as of 7 July to top the medal table.

So many golds, silvers, and bronzes are available through track and field events that the US always looks to farm them. With McLaughlin and Crouser just being the tip of the iceberg in terms of strength-in-depth, these Olympics promise a strong showing from in-form American athletes.

Away from one of track and field’s superpowers, Norway has medal hopes of their own. Karsten Warholm may have been inspired by what he saw from McLaughlin at the US Trials in the 400m hurdles as he went and broke the men’s world record four days later. The Bislett Games held inside an eponymous stadium in Oslo is one of the Diamond League circuit’s gems.

Established in 1965, the meeting records read like a who’s who of athletics. Warholm, buoyed by a partisan home crowd cheering him on, took eight-hundredths of a second off Kevin Young’s world record for the 400m hurdles that has stood since the Barcelona Olympics of 1992. He had been threatening to do it for a while after running sub-47 seconds both last season and the year before.

What makes Warholm’s achievement even more incredible is US Trials winner Raj Benjamin ran one of the top five fastest times ever for the 400m hurdles with a 46.83s effort. Their clash at the Olympics, a rematch from the World Athletics Championships of two years ago where Warholm prevailed, is another potential highlight of the Games. With so many athletes in the form of their lives, Tokyo should be some show.

Ricciardo: Hamilton “went in too hot” but not to blame in clash with Verstappen

Grant Holloway has world record in his sights in Toruń

Return of parkrun all set for June 26