Georginio Wijnaldum hopes he can stay fit until the end of the season after outling the exact way in which Liverpool’s injury crisis had affected their day-to-day routines this season.

Jurgen Klopp has spoken at length about the impact that this season’s fixture schedule is having on players. Indeed, Liverpool have suffered worse than most clubs for injuries due to the short turnaround in matches.

Naby Keita, Joe Gomez, Trent Alexander-Arnold, Fabinho, Jordan Henderson and Xherdan Shaqiri have all suffered muscle or related injuries since the start of the season.

Keita’s hamstring problem, suffered against Leicester last Sunday, prompted Klopp into a rant post-match that Sky Sports did not air in the UK.

However, after James Milner also encountered a hamstring problem against Brighton, Klopp eclipsed that exchange when speaking to BT Sport reporter Des Kelly.

The argument began when Kelly asked the German to confirm if Milner had a hamstring problem. Klopp said: “Yeah. Congratulations.”

After Kelly asked if Klopp was speaking to him personally, the manager added: “No, but you work for them. Hamstring, surprise, and they had injuries as well. But ask Chris Wilder how we can avoid that.”

Indeed, Liverpool emerged from the win with three more injury doubts. Klopp, however, is hopeful the trio did not suffer any long-lasting damage.

Such has been Liverpool’s issues this season, Klopp was forced into sending out something of a patched-up side into battle against Ajax.

However, a 1-0 win secured their place in the last 16 – with Klopp labelling the win “one of the best yet”.

Commenting on the injuries Liverpool are having to deal with, Wijnaldum admits they have taken their toll. Furthermore, the Dutchman is hopeful he can continue to avoid succumbing to injury himself.

Speaking to the Dutch media, as relayed by FcUpdate.nl, Wijnaldum said: “I don’t really have anything to complain about. I am blessed to stay fit during this period.

“I hope I can hold on until the end of the season. That’s going to be very difficult, but I’m confident.”

Wijnaldum was asked how Liverpool’s training sessions had been affected by the loss of several key stars.

And the Dutchman conceded that the players don’t spend as much time on the training ground for fear of further setbacks.

“It’s really just playing matches and resting at the moment,” he added. “There’s not really any training because there’s not a lot of time for that.”

Rio Ferdinand believes Liverpool must do all in their power to keep Wijnaldum, with the pundit casting aside his Manchester United loyalties to declare his love for the midfielder.

The future of Wijnaldum came up for debate prior to Liverpool’s Champions League win over Ajax. And Ferdinand reckons the player is massively underrated and is a hugely important player for the Reds. 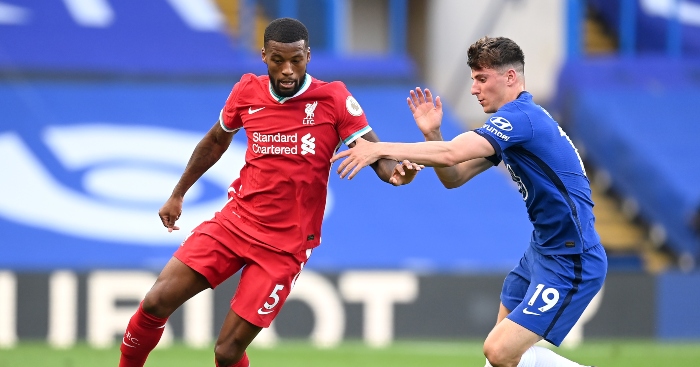 “I got to be honest: I love this player,” said Ferdinand on BT Sport.

“He’s very selfless, his intelligence, he’s underrated completely because he can play every single midfield position in that central area.

“He’s plays a No.10 role for Holland, the way he defends here [for Liverpool].”

Ferdinand has explained why players such as Wijnaldum are often more appreciated by teammates than fans.

“We do get players who you play with in your career who fans probably don’t appreciate as much,” Ferdinand added.

Netherlands defender Blind hoping to return from injury before Euro 2020