Home > Boxing > What’s next for Terence Crawford? Is a jump to PBC in his near future?

What’s next for Terence Crawford? Is a jump to PBC in his near future? 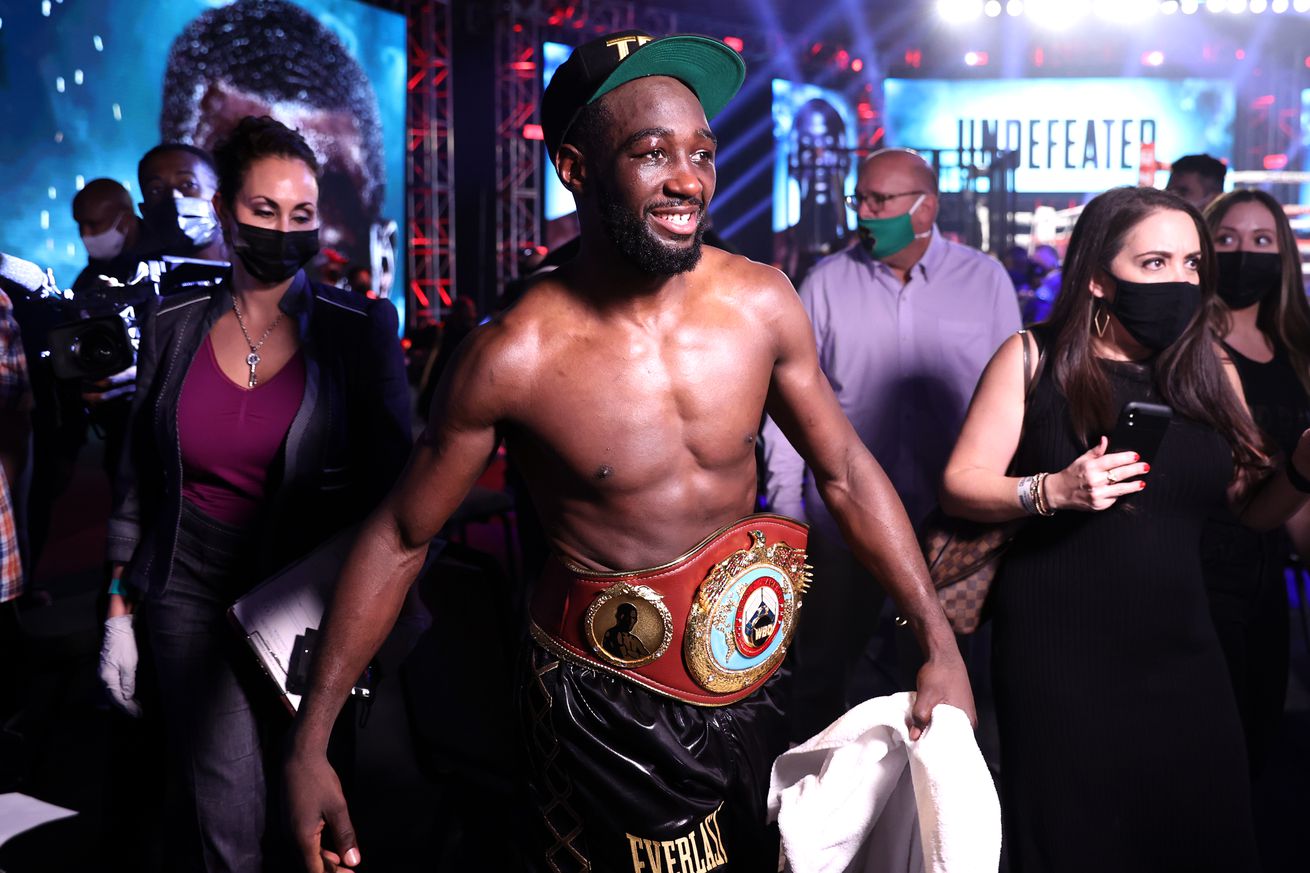 Terence Crawford’s best path may seem simple, but there are other considerations.

Terence “Bud” Crawford looked ferocious again on Saturday night, stopping Kell Brook in the fourth round of a fight that looked interesting for two rounds and became a wipeout shortly after, with Crawford battering Brook into a dazed state before the referee stopped the assault.

The issues are well-known. Crawford, the WBO titleholder, is a Top Rank fighter, and the rest of the welterweight division’s big names are with Premier Boxing Champions. And while Top Rank and PBC have worked together, notably on the Wilder-Fury 2 pay-per-view earlier this year, that came about because it was believed there were no bigger options for either man.

That’s not the case here. PBC still has matchups to make in-house at 147 with their name guys. And Top Rank still really don’t have anyone for Crawford, and every time he fights again, it’s one less name to pull from the hat.

Crawford has three options from here, it seems; really two with the second one split into two different ideas. Let’s take a look at them.

Crawford (37-0, 28 KO) recently said he’s got “probably like a few months” left on his deal with Top Rank. And just a couple days ago, Mike Coppinger at The Athletic reported that Crawford’s lawyer sent a letter to Top Rank’s Todd duBoef in September, which expressed a lot of frustrations Crawford has with the promotional firm. Coppinger’s sources also said that the “few months” actually extend to Oct. 2021, meaning Crawford has 11 months left on his contract from now.

That means that Crawford likely would want to fight again before his deal is up, but it’s also not so long a break that he might hold out from signing to fight anyone Top Rank can actually offer him. And it almost certainly means that PBC aren’t going to break their virtual freeze-out and make a deal. If they can just potentially have him on board in 11 months, why bother at this point?

At this moment, the obvious big fight at 147 is Crawford against WBC/IBF titleholder Errol Spence Jr. However you order them, the two are considered the clear No. 1 and No. 2 fighters in the division, and the fight has been a favorite topic for fight fans for a couple of years now.

Spence (26-0, 21 KO) is set to defend his belts against Danny Garcia (36-2, 21 KO) on Dec. 5 at AT&T Stadium in Texas in a FOX pay-per-view main event. Spence turns 31 in January, so he’s maybe not quite as young as a lot of people think himself, and he’ll also be returning from a serious car crash about a year ago. We don’t fully know what kind of fighting shape he’ll be in when he returns, but we’ll find out in a few weeks. If he’s the same Spence as before, and he wins, Spence-Crawford (or Crawford-Spence, whatever) remains the fight at 147.

But PBC also have Danny Garcia, they also have Keith Thurman, they also have Shawn Porter. Porter was reportedly given the green light from PBC to negotiate for a Crawford fight earlier this year, but nothing came of it. And if Spence wins in December, Porter may be in line for a rematch with Spence, after they had a terrific fight in Sept. 2019.

PBC may also be the easiest place for Crawford to get the fight that he seems to want quickly more than any other, and that’s Manny Pacquiao. Pacquiao (62-7-2, 39 KO) is about to turn 42 and while still a top welterweight, and the WBA titleholder, he’s certainly past his best years. That’s just not arguable. That said, he is also still the biggest name at 147, and that is also not arguable.

Pacquiao seems intent on fighting Conor McGregor, but we’ll see. Manny isn’t specifically with PBC anymore — he fought under their banner against Adrien Broner and Keith Thurman in 2019 — but he could certainly work with them again for the right deals. If there’s a thought that Pacquiao-Crawford can wait another 12 months, PBC might be the place the deal most easily gets done.

Or not! Top Rank reportedly had legitimate discussions about doing Pacquiao-Crawford, with Pacquiao’s team open to the talks and Crawford’s team on board. Bob Arum was going to stage the fight in the Middle East, but COVID canceled any plans to do it in 2020, which is how they wound up going back to Kell Brook, who was always in the mix but not anyone’s first choice.

Pacquiao hasn’t fought with Top Rank since his controversial 2017 loss to Jeff Horn in Australia, but it doesn’t seem like there’s real bad blood there, either. Sure, Bob Arum has at times dismissed the idea of Crawford fighting Pacquiao, saying he thinks Manny is too old or that Crawford would beat him up and he still has affection for Manny and just couldn’t bear to see such a thing. But obviously there’s legitimate interest from Top Rank in making the fight. And there’s good money in it, too. There was enough willingness to talk that they did talk and had, it seems, advanced discussions.

If they can get that done, it might be something that convinces Crawford to stay with Top Rank longer. And even if it doesn’t, it’s a fight that Crawford would be favored to win now, with all due respect to the legendary Pacquiao, and it’d be a money-maker for Top Rank. Like, if Crawford’s going to leave either way, why not cash out as big as you can on the time he’s got left.

But again, Pacquiao seems intent on fighting McGregor. If he does that, it might be his only fight for 2021. He’s got Senatorial duties in the Philippines and he’s a part-time fighter now.

Other than Pacquiao, if Crawford fights between now and his contract expiring and stays at 147, there are a few options, but not many:

And that’s kind of it. There’s not even anyone to come up from 140 too soon, as Josh Taylor and Jose Ramirez hold all the belts there, and while both are with Top Rank, full focus is on getting them into an undisputed title fight against one another, which may take time as Ramirez has a mandatory order to face Jack Catterall that he might have to get past first. Former 140-pound titlist Regis Prograis fought with PBC recently, but that was reportedly a one-off, at least for now. He could fight Crawford at 147, sure, and it’d be a good offer, but he really does seem focused on regaining belts at 140 first.

After that, who is there that’s actually available? Rashidi Ellis? Chris van Heerden? Kudratillo Abdukakhorov? None of those are big fights. None of them would quiet Crawford’s frustrations.

Stay at Top Rank, move up in weight

Crawford’s team have indicated some interest in maybe moving up to face WBO 154-pound titleholder Patrick Teixeira (31-1, 22 KO), and Teixeira has said he’d love to do the fight, too.

A few things about this idea:

What may seem the obvious best path, just fighting once more (or not!) under Top Rank contract and then bolting to PBC in a bit less than a year, may not be so simple. PBC could frankly low-ball him on an offer, in all honesty. There’s the argument, and it’s not illogical, that he needs them more than they need him. What’s he going to do, turn them down and stay desperately searching for good fights? Turn them down and wait on Josh Taylor or Jose Ramirez? And if that happens and Crawford wins again, then what? Same situation again, basically. No big opponents readily available. And even older with less time to find one.

The big fights are at PBC, and that’s a fact. That might not be next for Crawford, but it might not be far off. Or he might just stay mired in this weird position where he’s obviously one of the best fighters in the world, and he just doesn’t have the options to make a big fight, which keeps turning into more building backlash against a fighter who badly wants to get one done.

Josh Warrington: I Have To Box as I Know I Can, This Time It Will Be Different

Martin Ward one step away from world title shot