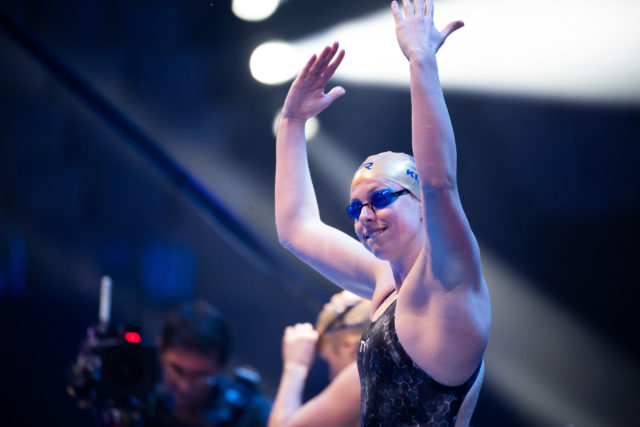 The Cali Condors quartet of Olivia Smoliga, Lilly King, Kelsi Dahlia and Erika Brown combined to set a new world record in the women’s 400 medley relay during the 2020 ISL Finals, producing a time of 3:44.52 to lower the previous mark of 3:45.20 established by the U.S. team at the 2015 Duel in the Pool.

Smoliga led off in 55.60, missing her American Record in the 100 back by just .13 (she would lower it to 55.04 the following day), King unleashed the fastest breaststroke leg in history in 1:02.40, Dahlia uncorked the second-fastest fly split ever in 54.79, and then Brown, as she’s done all season, reliably anchored the team home in 51.73.

While Energy Standard’s winning relays in the women’s 4×100 free, men’s 4×100 free and men’s 4×100 medley also went under the world record, the Condor women’s mark is the only that will hold up due to the fact that all four swimmers represent the same country internationally (USA).

You can read more on the record here.

Watch the race video below:

All U.S. Olympic Trials Tickets to Be Refunded and Resold Due to Seating Change