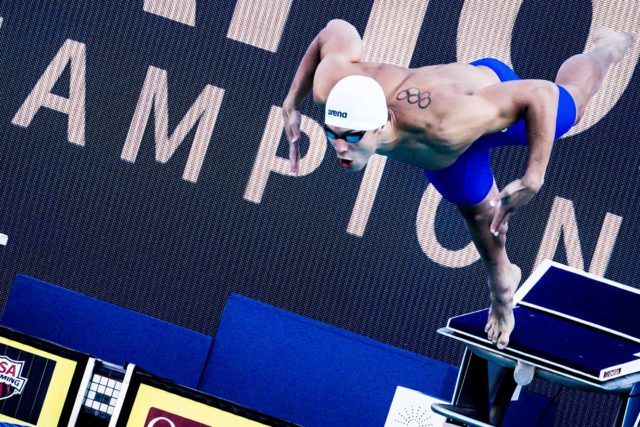 Once again, the Huntsville site of the 2020 US Open was highlighted by two of the United States’ brightest sprint stars on Saturday morning. In the women’s 100 meter freestyle, US National Team member Gretchen Walsh secured the win, following her impressive 50 freestyle victory on Friday. Walsh posted a time of 54.37 to swim the second-fastest time in the country for the season, just behind Torri Huske’s 54.04 from the Richmond site. Walsh’s swim also ranks 6th in the world this year.

Olympic gold medalist Ryan Held easily won the men’s 100 freestyle, swimming a time of 49.00, making him the only swimmer under the :50 second-barrier. Held now holds the top American time in the country for the 2020-2021 season, with the top time overall being held by Russian Andrei Minakov.

Also taking an easy victory over the field was Alabama’s Kensey McMahon in the 1500 freestyle. McMahon posted a time of 16:38.41 to claim victory by almost 30 seconds, also making her the only swimmer to break 17 minutes.

US Junior National team member Rye Ulett swam to victory in the 200 backstroke, with a time of 2:13.41. Ulett’s best time in the event stands at a 2:09.70 from last summer’s National Championships. Ryan Patterson narrowly won the men’s race with a time of 2:06.13, touching just ahead of Dynamo teammate Andrew Simmons’ 2:06.98.

In a slim 200 breaststroke field, 17-year-old Leitta Sim took victory by a large margin, posting a time of 2:33.34 to beat the field by 5 seconds. In the men’s event, Michael Houlie claimed victory over Jason Hamilton by .03, swimming a final time of 2:21.31.