Carlos Vinicius opened his Tottenham account with a double against Ludogorets as Jose Mourinho’s side strolled to a comfortable 4-0 win in the Europa League.

The Brazilian had failed to score in any of his first four appearances for the club but looked sharp in a much changed Spurs team.

The liks of Harry Kane, Son Heung-Min, Hugo Lloris, Eric Dier, Moussa Sissoko and Toby Alderweireld were all rested, but there was still plenty of quality in the line-up with Tanguy Ndombele, Gareth Bale, Dele Alli and Lucas Moura all starting.

Bale was heavily involved in the opening stages as he took charge of three free kicks in potentially dangerous areas, but failed to trouble Ludogorets goalkeeper Plamen Iliev with any of them. Alli also sent a long-range effort high and wide as Tottenham pressed for an opener.

The visitors weren’t to keep Spurs out for long though as Vinicius scored his first of the night in the 16th minute, latching on to Alli’s through ball before calmly tucking his shot into the bottom right corner.

Chances were coming thick and fast for the hosts and Harry Winks was the next to try his luck with a 30-yard shot, but it whistled just wide of the post.

Left-back Ben Davies almost doubled the lead in the 34th minute after getting in behind the defence, but saw his shot crash back off the post and out for a goal kick.

But Vinicius did make it 2-0 just moments later. After Ndombele had forced Iliev into a diving save, Alli reacted first and generously squared for the striker to score into an open net from just a few yards out. 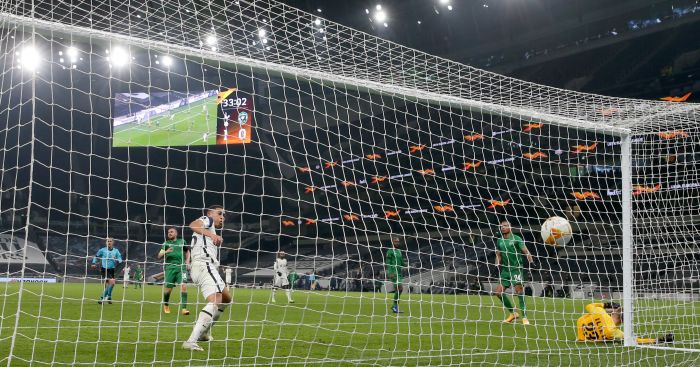 That gave Tottenham breathing space at the break, but they came out for the second half hungry to add to their tally.

Within a minute of the restart Bale almost set up Vinicius to complete his treble, but he couldn’t quite get on the end of the Welshman’s header across goal.

Shortly before the hour mark Matt Doherty pushed forward and almost teed up Bale but his shot was saved well.

The third did arrive in spectacular fashion in the 64th minute, although it came from an unlikely source.

Winks, who had gone 22 months without scoring, attempted to hit a cross-field pass to Bale who had made a run into the box but instead saw the ball float over the the ‘keeper and in off the crossbar from an impressive 56 yards distance.

Bale was substituted for Jack Clarke in the 67th minute but it wasn’t a sign of Spurs taking their foot off the gas as soon after they were 4-0 up through Lucas Moura.

After Hojbjerg had pressed Ludogorets into an error in their own defensive third, Alli whipped a cross in from the right to Vinicius who controlled well before rolling the ball into the path of his compatriot, and he finished off the move by curling into the far side of the net.

With the game wrapped up, Mourinho took the opportunity to introduce some youngsters for the last ten minutes.

Goalkeeper Alfie Whiteman, midfielder Harvey White and forward Dane Scarlett were brought on and the latter two both had opportunities to score almost immediately, but Scarlett was denied by Iliev before White’s drilled shot sailed wide.

Scarlett was played in again by Vinicius in stoppage time but he was caught in two minds when it came to the finish with White wide open in the centre and he dragged his shot across the face of goal.

The result keeps Spurs second in group J after four rounds with a trip to LASK to come next week.

The Kessie of death! Milan optimism misplaced as Inter seize control of Scudetto

Mourinho backs Bergwijn after receiving social media abuse: He´s one of my boys