By Robert Gibbs on SwimSwam 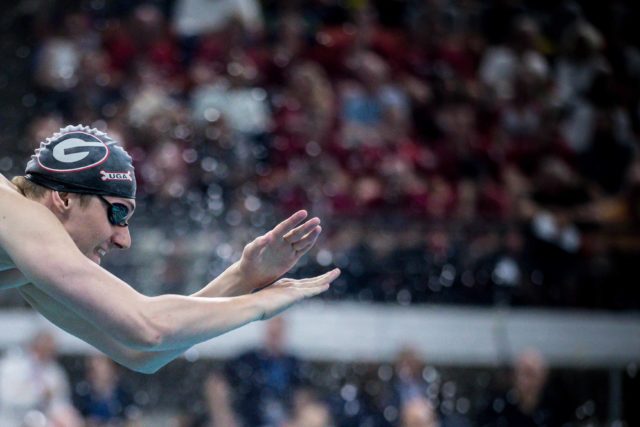 The UGA Fall Invite, the first of the scaled-back fall invitational-style meets we’ll see this week, features the hosts, the Georgia Bulldogs, along with the Georgia Tech Yellow Jackets, and the Florida State Seminoles. The meet got underway way this morning with heats of the 500 free, 200 IM, and 50 free.

On the men’s side, Georgia junior Andrew Abruzzo led the 500 free this morning with a new lifetime best of 4:13.54, almost exactly 1.5s faster than his previous lifetime best. Abruzzo is one of those types who has excellent long course credentials, but hasn’t quite figured it out in yards yet. This morning’s swim is a promising sign in that respect, as it would’ve made the A-final at the 2019 NCAA Championships.

Rounding out the top three were Abruzzo’s teammates Jake Magahey (4:17.03) and Greg Reed (4:17.33). All told, the Bulldogs took five of the top eight spots, with Georgia Tech taking two, and Florida State one.

This morning’s prelims set up what should be a fun battle tonight in the 200 IM. Georgia sprinter Javier Acevedo put up the top time this morning with a 1:43.59, just ahead of freshman teammate Luca Urlando, who’s 1:43.60 this morning is his 3rd-fastest time ever. The Bulldog pair will have to hold off Georgia Tech All-American Caio Pumputis, who was over a second behind this morning with his 1:44.75, but holds a lifetime best of 1:41.04.

Unsurprisingly, Florida State had a far better showing in the 50 free, as the ‘Noles have been known for their sprint chops as of late. While Georgia’s Dillon Downing took the top seed with a 19.42, just a tenth off of his lifetime best, FSU men took half the spots in the top eight, with Peter Varjasi‘s 19.65 leading that group. Georgia Tech also grabbed two of the top eight spots, led by Kyle Barone, whose 19.79 was the 3rd-fastest time of the morning, and is a new lifetime best for him by 0.17s.

It was a similar story on the women’s side, where Courtney Harnish took the top seed in the 500 free with a 4:41.48, with teammates Olivia Anderson (4:45.68) and Jillian Barczyk (4:47.11) rounding out the top three. .Georgia Tech nabbed three of the top eight spots, and Florida State took one.

Again, just as on the men’s side, the Bulldog women also put up the fastest time of the morning in the 50 free. Gabi Fa’Amausili led the way with a 22.52, with teammate Maxine Parker just behind in 22.62. FSU’s Jenny Halden rounded out the top three, as the ‘Noles took five of the top eight spots, with Georgia taking a total of three.

Action continues tonight with finals for all of this morning’s evens, plus timed finals of the 200 free and 400 medley relays.