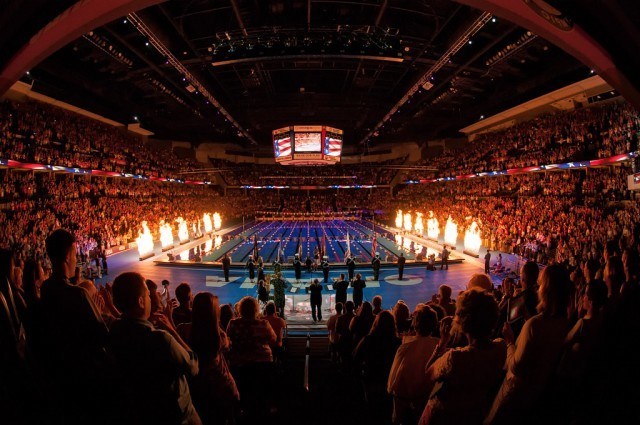 This year’s Golden Goggles, slated for Tuesday, November 24th, will be a virtual event this year, but you can still feel a part of the action by bidding on one of the unique items up for auction by the USA Swimming Foundation.

The online auction opened yesterday, Monday, November 16th, and will close at noon Eastern on Wednesday, November 25th. All proceeds support the USA Swimming Foundation‘s mission to save lives and build champions, so you really can’t go wrong trying to snag some of the swag that covers an array of interests and budgets.

To help you decide, here are my top 5 Golden Goggles Online Auction picks.

There are few swimmers more red hot at the moment than backstroker Ryan Murphy, with the Olympic gold medalist’s LA Current racing its way into the International Swimming League (ISL) final. Murphy is a big reason why having won multiple skins events in addition to consistently pulling major points in the individual events.

A little more expensive, but still in the realm of holiday gift-buying budgets, your favorite swim fanatic can literally own a piece of the 2016 U.S. Olympic Swimming Trials with this particular item.

For a rarity outside of the world of swimming, any sports memorabilia collector needs to seriously consider getting in on the Muhammed Ali signed Everlast boxing glove. This priceless glove is inscribed ‘Muhammed Ali AKA Cassius Clay, which represents one of the late inspiring athlete’s most sought after signatures.

The glove is enclosed in its own custom-designed plexiglass boxing glove case; all you have to do is put it on your shelf and proceed to be motivated every day you look at it.

If you had the chance to kill the ‘I need a stocking stuffer’ and ‘we’re so bored of quarantine’ birds with one stone, wouldn’t you take it? Take two minutes to offer up a bid on this affordable, yet time-consuming jigsaw puzzle featuring the 2016 Olympic Trials men’s 200m fly final.

Michael Phelps? Tom Shields? Chase Kalisz, anyone? These men can be put together piece-by-piece by your family as a swim-theme bonding activity while sipping cocoa and watching chestnuts roast on the open fire this December.

Many swimmers consider the U.S. Olympic Trials to be even more stressful than the Olympic Games themselves, which means you need a seat at this exhilarating event that only happens once a year. As an attendee in Omaha in 2016, I can attest that seeing athletes in their raw, emotional states vying for the coveted two spots on the Olympic roster is something a spectator can only truly grasp by being in the arena itself.

But this online auction package takes things to the next level entirely by granting the winning bidder the VIP treatment, including a special tour of the venue, access to the USA Swimming House, and the opportunity to actually swim in the Trials pool itself.

Bid winners also get to see what happens when an athlete makes the Olympic team by going through team processing where they will go home outfitted like an Olympian.

3 nights’ hotel accommodation is also included, which means you won’t have to run the risk of sleeping in your car or at Waffle House in crowded Omaha.

FINIS Set of the Week: Tugboat Power Up!

Finnish, Bulgarian, and Czech Records All Fall in Prelims of Men’s 200 Breast