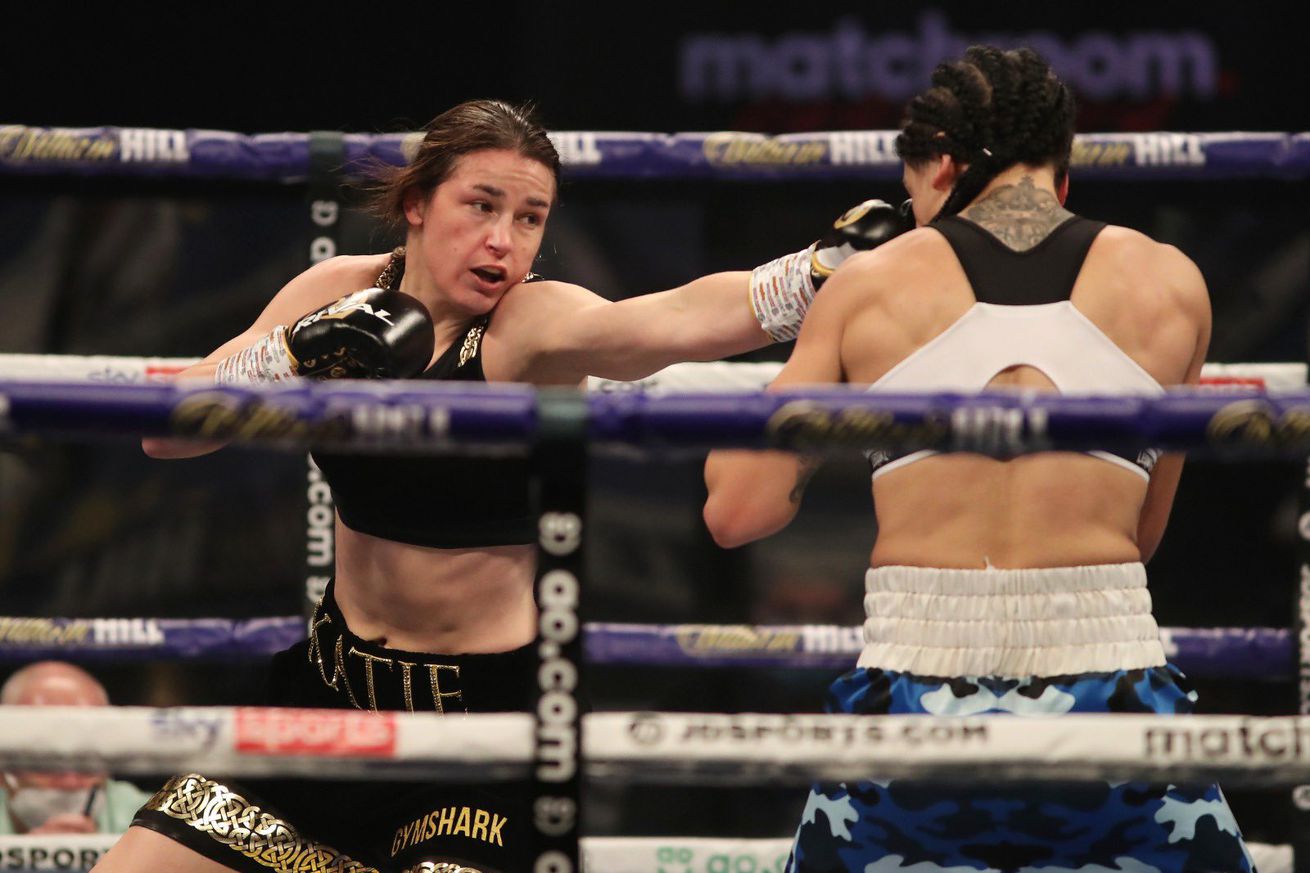 Katie Taylor successfully defended her undisputed lightweight championship today with a dominant decision win over Miriam Gutierrez, basically shutting out the Spanish challenger on scores of 99-91, 100-90, and 100-89. Bad Left Hook had the fight 100-89 for Taylor, who retains the WBC, WBA, IBF, and WBO belts.

Taylor (17-0, 6 KO) did look to “make a statement” here, did look for a stoppage, but the 37-year-old Gutierrez (13-1, 5 KO) was simply tough as nails, and never gave up on the fight despite being out-classed. Gutierrez had never been in near this level, only turned pro in 2017, and gave this fight everything she could. She was extremely game.

That said, Taylor started fast in the first, looking for an early stoppage, had Gutierrez hurt clearly in the third, dropped Gutierrez late in the fourth, and really stormed trying to finish in the sixth. But Gutierrez, to her credit, stood up to all of it, and can say she went 10 rounds with arguably the best women’s boxer to ever do it.

Taylor gave Gutierrez credit for the performance, too, and admitted she did indeed try to get Gutierrez out.

“She was very durable, obviously bigger and stronger than I was. I couldn’t get her out, but overall it was a great performance,” Taylor said after the fight. “I never go into any fight complacent. She was actually very, very heavy-handed. When you go in complacent, that’s when you can get upset by those girls.”

“I thought I could get her out in the first, but how wrong I was,” Taylor added with a laugh. “She was very strong, very durable. I caught her with some great shots, but credit to her, she’s very, very tough, and it was a great fight.”

Asked about who Taylor could fight next, promoter Eddie Hearn threw out several names, including Amanda Serrano — whom Taylor’s trainer said would need to stop “ducking” the fight — and options from different weight classes, including the McCaskill-Braekhus 2 winner for undisputed at welterweight, which would probably be a catchweight fight; Chantelle Cameron once/if Cameron is undisputed at 140; Terri Harper coming up from 130, or Mikaela Mayer or Tasha Jonas doing the same.

“There isn’t anyone she wouldn’t fight,” Hearn said.

This version of Harper (11-0-1, 6 KO) was notably better than the one we saw in August, when Harper went to a highly-disputed draw with Tasha Jonas. Thanderz (13-1, 2 KO) may not be quite as good as a switched-on Jonas was, mind you, but this was a dominant performance, and Harper retains her WBC 130-pound title in style, winning every round on our card before hurting Thanderz with body shots and forcing the referee to step in at 1:12 of the ninth.

Harper, 24, said she hurt her hand in the fourth round, but you never really would have noticed just watching the fight live, as it didn’t seem to bother her much. She jabbed more, but she also jabbed so effectively that it would have been odd to not see her keep at it. She made changes in camp heading into this fight after the scare with Jonas, including adding a strength and conditioning coach, and all of that speaks well to her perspective on what happened in that fight. She knew it was close at best, knew it was debatable, and knew she had to work to be better. And she did.

“I just stuck to the game plan. I listened to everything (my trainer) said when I went back to my corner, and we just changed it up a bit and I got the win,” Harper said.

Promoter Eddie Hearn is looking to do a unification next, he said. Matchroom have Maiva Hamadouche (IBF) and Hyun-Mi Choi (WBA) under contract, so either of those could be easy to make, and there’s also Mikaela Mayer (WBO), who badly wants Harper and has called her the division’s weak link among the titlists.

This was originally meant to be for the vacant WBA title at 122, then Ebanie Bridges pulled out of the fight, and Ball was then tasked with facing Argentina’s Guanini on short notice, now for the interim WBC title. Guanini holds the IBF 115-pound title, but then didn’t make weight at 122 on short notice, so only Ball could win the vacant interim belt.

For the 29-year-old Ball, it’s a big win that puts her in line for the full WBC title, currently held by Mexico’s Yamileth Mercado, or she could look back to the vacant WBA fight with Ebanie Bridges next, as that should in theory still be on the table.

“I want to get the WBA. I’m happy to fight Bridges and do that fight early next year, but whatever,” Ball said. “I want to be at world title level, I don’t want to start picking and choosing.”

Why Ryan Garcia Captivates The Public

Whyte: I would love to smash Wilder’s face in