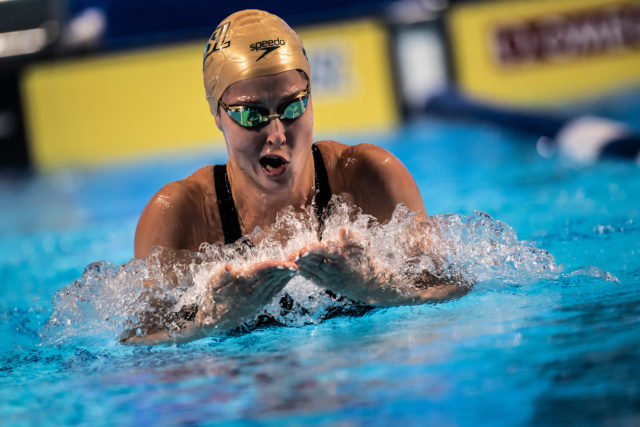 One of Canada’s top swimmers is joining the country’s most elite training group four and a half months out of the 2021 Olympic Trials.

“I’m really excited to have the opportunity to train at the High Performance Centre – Ontario,” Pickrem told Swimming Canada. “I’ve worked with Ben (Titley) and Ryan (Mallette) before and I’m excited to see what my future swimming career has in store under their coaching.”

Previously, Pickrem trained out of her alma mater, Texas A&M University, where she was a 2019 graduate.

In the recent ISL season, Pickrem captained the London Roar to a third-place finish, also lowering national records in the women’s 200 and 400 individual medley (SCM).

“I’m focused on high performance and being the best international racer I can be,” said Pickrem. “The ISL was a great way to get back to racing, now it’s time for me to focus on preparing to be the best I can be at the Trials in April.”

“Sydney is a great young woman,” Titley said. We’ve worked with her on a number of national teams and we love her positivity. She will be training with world-class swimmers on a daily basis. She will raise the standard and be someone that younger swimmers can learn from and race against.

“She will be great for our program and great in our program. We’re excited to have her and we’re looking forward to being part of her future success.”

Pickrem, 23, was the bronze medalist in the women’s 400 IM at the 2017 World Championships in Budapest, and followed up with three more third-place finishes at the 2019 Worlds in the 200 breaststroke, 200 IM and the women’s 400 medley relay. Her 200 breast swim made her the first Canadian woman in history to win three individual LC World medals, a feat that was matched by Kylie Masse later in the competition.

The addition of Pickrem puts the majority of Canada’s top-end talent all in the same pool day-to-day leading up to the Olympic Trials, scheduled for April 7-11, 2021, and ultimately the Tokyo Games. Including only swimmers that competed in the relay finals (the Canadian women won bronze in all three relays), Masse, Maggie MacNeil and Emily Overholtare the only 2019 Worlds medalists that aren’t training with HPC – Ontario.

“It is great to have Sydney in Canada and at HPC-Ontario for her preparation towards the Tokyo Olympic Games,” said Olympic Program Senior Coach Martyn Wilby.

“She is a world-class athlete who has proven herself at the international level time and time again and will only add to an already great group of swimmers. It’s a positive move for Team Canada, for Sydney, and for the centre, and we expect her to be a leader in the group and on the national team.”

2021 M. NCAAs Preview: Can Michigan Recreate Their Big Tens Magic in the 200MR?