Sead Kolasinac’s loan move to German side Schalke has already been given the green light.

And Arteta has stated that offloading players is a priority.

With that in mind, Campbell has identified three Gunners players who would benefit from getting more first-team action elsewhere.

The trio are Eddie Nketiah, Reiss Nelson and Joe Willock.

However, he has been effective in cup games. The 21-year-old, who had a loan spell at Leeds last season, has scored three times in the Europa League and once in the EFL Cup.

He also netted in the Premier League win over West Ham back in September.

It’s a similar story with Willock, who has three goals in the Europa League. But he’s started only twice in the Premier League and come off the bench three times.

Campbell says all three need to be playing more to gain the experience that would benefit Arsenal in the long term.

Campbell told Football Insider (via The Metro): “Some of these very gifted, talented youngsters have to play regular football.

“Once they play regular football they will be much better players when they come back at Arsenal.” 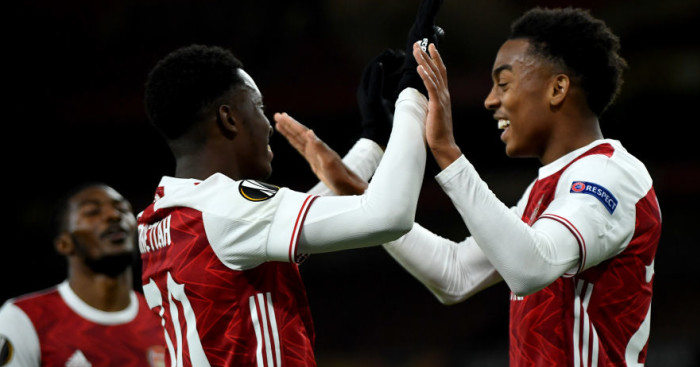 Campbell added: “Being a bit-part player is one thing but regular games, regular starts makes a massive difference to the psyche of the player.

“I’m told Reiss Nelson, possibly Joe Willock, may be going out on loan in January. It would be really good for their careers.

“I think Nelson could go to a Premier League or a Championship club. But the Championship is tougher, that might be a better move.

“Nketiah grabbed a great assist against Southampton and Mikel Arteta is just trying to find the right balance.

“It really is difficult. I think Nketiah needs a season under his belt playing regular football.

“It is one thing coming in now and again at Arsenal but you never become seasoned that way. When you play week in, week out you learn so much more.

“He did not really start during his loan spell at Leeds. Nketiah should be going out on loan to learn his trade, he really should.

“He is not going to start for Arsenal very often so what does he do? Is he happy just sitting on the bench?

“Once he learns his trade he will be a different player because he knows where the goal is.”

Nketiah made 17 Championship appearances for Leeds but 15 of those were from the bench. He scored three goals during his time at Elland Road.

Maradona was a poet and a great champion – Pope Francis

Fosun's dream signing: Wolves must swoop for "big player" who has a "ton of potential" – opinion