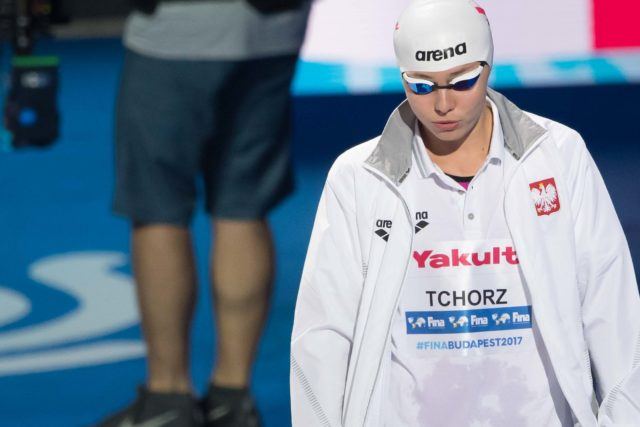 A debacle involving the Polish Swimming Federation’s submission process has resulted in six swimmers being sent home from the Tokyo Olympic Games after having just arrived at the Japanese city.

Alicja Tchórz, Bartosz Piszczorowicz, Aleksandra Polańska, Mateusz Chowaniec, Dominika Kossakowska and Jan Hołub were all originally named to the Polish lineup for the postponed 2020 Olympic Games as relay-only swimmers. As such, they traveled to Tokyo as part of the 23-strong Polish contingent, whose entire initial roster can be reviewed at the bottom of this post.

However, almost as soon as they arrived, the swimmers can be seen hugging their teammates as they depart Japan and say goodbye to their Olympic dream due to an apparent error in the qualification submission process involving sending too many swimmers.

This video is from swimmer Chowaniec, posted by Polish media.

A post dated July 17th on Polish Swimming Federation website confirms that its revised Olympic roster will now consist of just 17 competitors, citing issues with ‘the completion of the approval process by FINA, the IOC Organizing Committee and the Polish Olympic Committee.’

The statement also reads, ‘Tomorrow, the President of the PZP will publish an official announcement containing all information relating to the situation, the Association’s activities related to the approval of the composition and decisions taken.’ You can read the statement here.

The FINA Olympic qualification standards read that each nation may enter relay-only athletes provided they have at least achieved the ‘B’ standard for the corresponding stroke/distance of the relay in which they are entered and can include up to 10 additional athletes for a nation qualifying 5 relays.

After adding up individual event qualifiers of both A and B cuts, these slots were filled beyond what Poland had included on its roster and the decision was made on who had to leave.

The ability of Poland to piece together relays for the Games is also now in question. The women’s 4x100m freestyle relay in particular looks to be eradicated, while the men’s 4x200m free relay may also be out of participating swimmers. We’ll continue to follow the fallout of this situation in that regard.

In the meantime, several Polish swimmers signed an open letter to Paweł Słomiński, the President of the Polish Swimming Federation, calling for the organization’s entire board to resign immediately over the situation.

‘The actions of the Association led to an unprecedented event in the history of Polish sport,’ reads the letter.

‘In addition, Polish swimming – both in the eyes of the public and potential sponsors – has been exposed as a laughing stock. and it will have a glaring effect on all competitors who compete in the white and red colors on a daily basis.

‘We appeal to the president and the entire board to resign immediately.’

22 swimmers signed the letter, with an exception by sprint ace Kasia Wasick, reportedly only because she physically was not in Tokyo yet. SwimSwam reached out to Wasick, as well as several other Polish swimmers, for comment.

SSPC: Swimmer Matthew Marquardt Cycling Across the US to Raise Money for Cancer