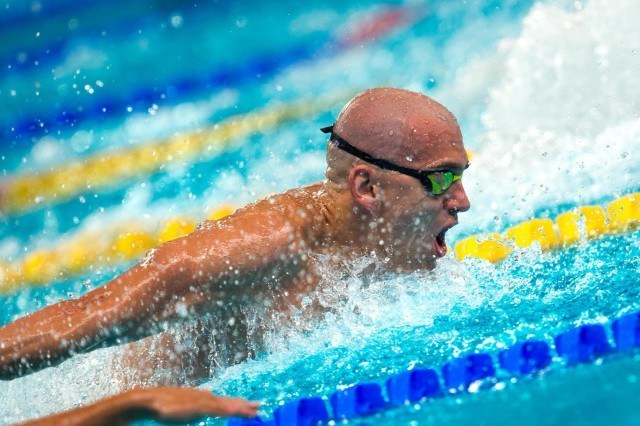 Hungarian World Champion and 6x Olympic medalist László Cseh made an appearance on the Hungarian version of the show “The Masked Singer”, which in Hungarian is called “Nicsak, ki vagyok?-ban.”

On the show, celebrities compete against one another in a singing competition while wearing intricate costumes that disguise their true identity. Throughout the competition, a panel of celebrity judges attempt to guess the identities of the contestants. Only once a contestant is eliminated can they remove their mask and reveal who they are.

Cseh elected to appear on the show as “the horse”, posting a picture of his costume on his Instagram account.

Although the judges immediately associated Cseh’s stature with that of an athlete, they all failed to identify him.

Although Cseh has never won an Olympic gold medal, he has come close on several occasions over the span of his almost 20 year career, earning 4 silver medals and 2 bronze medals, with 3 of his silvers coming behind Michael Phelps’ legendary 8 gold medal haul in 2008. Cseh was also the 2015 World Champion in the 200 butterfly.

At 34 years-old, and turning 35 in less than 2 weeks, Cseh is not ruling out participating in the postponed 2021 Olympic Games.

How to Create the Best Dryland Workouts for High School Swimmers

Bilquist Drops 28.75 in 50 Meter Back at Cactus Classic

Pernille Blume Swims 24.17 in 50 Free While Dealing with “Back Problems”