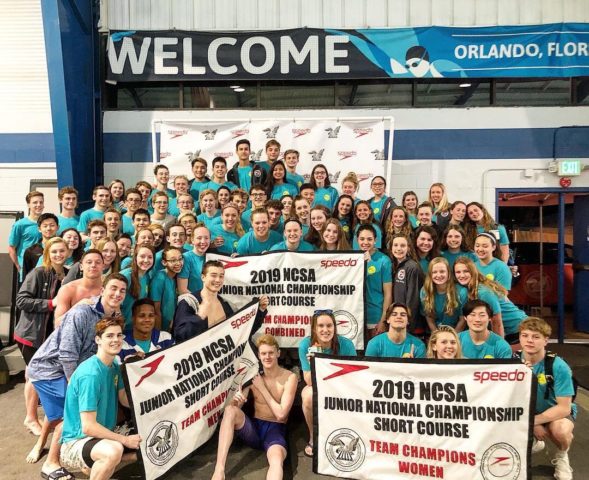 The Club Excellence Program recognizes USA Swimming’s top performing clubs in the development of athletes aged 18 and under, using a point system to rank the nation’s clubs.

Among the top junior performers this season for Nation’s Capital included National Team member Phoebe Bacon, who won a pair of gold medals at the 2019 Pan American Games, her first-ever senior international competition. Bacon ranks as the country’s third-fastest swimmer in the women’s 100 backstroke (LCM) since the beginning of 2019, while also sitting eighth in the 200 back.

Due to limited access to long course competition throughout the summer of 2020 due to the coronavirus pandemic, USA Swimming’s Senior Development Committee chose to honor all 2020 Club Excellence Clubs in the 2021 Program. In other words, clubs that struggled to have access did not lose their ranking, but those teams that were able to compete had the opportunity to improve their medal status.

The date range decided on by the committee was July 1, 2019-August 31, 2020 to calculate the Club Excellence Points this year.

Generally the top-20 clubs earn a Gold-medal ranking, but because of the pandemic, this year there are 26.

The following are the six clubs who achieved a Gold Medal ranking for 2021 after not doing so in 2020, accompanied by their ranking:

For both Bellevue Club and Elmbrook, this was their first-ever Gold Medal ranking. Since the program’s inception, 87 clubs have earned Gold Medal status at least one.

Teams earn points for each of the best times their 18 & under swimmers perform throughout the season. Athletes are given “power points” for their times, with bonus multipliers when an athlete achieves a silver or gold time standard. Only long course meters times are accepted.

Among the 20 Gold Medal Clubs from last year, the TAC Titans (+5), NOVA of Virginia Aquatics (+4) and Mission Viejo Nadadores (+4) made the biggest moves up the rankings.

SwimMAC, Mason Manta Rays, SwimAtlanta and Long Island Aquatic Club are the newcomers to this category compared to last year.

USA Swimming’s Senior Development Committee also made changes to the grant funding process for 2021 in light of the pandemic. The program will provide grant funding for 78 different clubs across the nation, which will help enable the teams to “expand and enhance their programs as they strive for the highest ideals of athlete performance”. For full information about the 2021 program requirements and grant funding, click here.

Ashton 2010 or May 2020? Rugby Union Weekly debate which wonder-try was better.