Anthony Elanga is looking follow the likes of Mason Greenwood and Marcus Rashford in taking the well-trodden path from teenage talent at Manchester United to first-team regular.

Ryan Giggs, Paul Scholes and Phil Neville are previous winners of a hotly contested in-house award that has also been won by current United first-teamers Rashford, Axel Tuanzebe and Greenwood.

Elanga followed the latter in receiving the award and is now looking to join his fellow teenager in Ole Gunnar Solskjaer’s first-team set-up, having got a taste of it in a pre-season friendly at Aston Villa.

“You look at the likes of Mason and Rashy, there is a pathway there,” the teenager told the PA news agency.

“It just shows you that if you’re willing to put the work into it and continue to work hard day in, day out in training there’s a pathway for you there.

“Obviously we’ve got a manager in Ole trusting the youngsters, so there’s a pathway there and I’ve just got to keep working hard.

“You can see that in the results and I’m just happy at the moment, I’m enjoying my football.”

Elanga has continued to impress since development football’s belated resumption after the first lockdown, helping Neil Wood’s side qualify from their EFL Trophy group with Wednesday’s trip to Morecambe still to come.

The 18-year-old has long been considered a hot prospect at Old Trafford, where he has pushed through the age groups having been spotted by the club shortly after moving to the north-west from Sweden seven years ago.

“I always grew up watching United and when I’d seen that I got scouted I was like, ‘Woah, it’s an opportunity I can’t say no to’,” the Sweden youth international said with a Manchester twang.

READ MORE: Bruno Fernandes had only one weakness, says Italian who scouted him

“My mum and dad always said just stay focused and don’t let success get to your head, if that makes sense. Don’t get complacent.

“You can always get better and better. Never get complacent and just stay humble.”

The teenager not only has a striking mindset but an impressive family pedigree, with his father Joseph Elanga part of Cameroon’s 1998 World Cup squad and international team-mate of Samuel Eto’o. 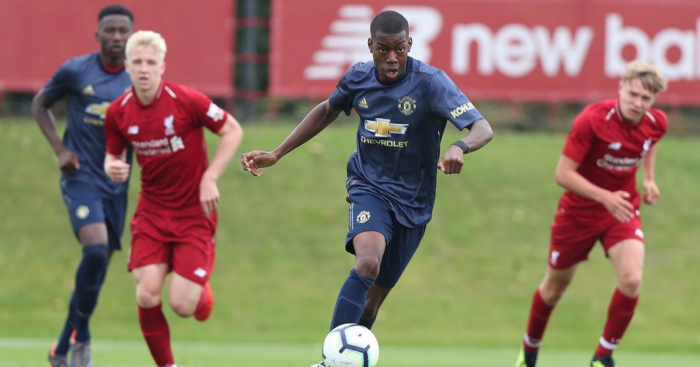 “Obviously my dad used to play with him and always said he was an example to look at, the way he was on the pitch,” the 18-year-old said of the well-travelled former Barcelona and Inter Milan forward.

“We play similar positions – he used to play left striker or right wing – and Thierry Henry used to do the same, so probably the two most people that I used to look up to growing up.

“My dad is the reason why I fell in love with football, really. I remember watching him.

“He was a left-back. He was quick – obviously I’m quicker! – but he was a really good player.

“He was tough – and still is. After games he’ll tell me what I’ve done well and what I can improve on, which is good.

“You need something like that to keep you going because you can’t just relax on one game. You can always get better and better.

“He does talk to me about it because it is important. He always tells me to stay focused and keep my head down.

“If I can continue my head down and keep working hard, there is a pathway there and obviously for the national team if you want to play in the World Cups, play in the Euros and things like that you’ve got to do the same.

“It is an inspiration to have him around.”

Pundit backs Bielsa to get ‘massive’ Leeds transfer over line, purring at possibilities

"He gets a lot of stick" – Exclusive: Pundit raves over Bielsa's "interesting" Leeds decision