The two were at the centre of a flash point early in the second half. Pepe headbutted Alioski and referee Antony Taylor showed the Arsenal man a red card.

Inevitably, social media went into overdrive. And both clubs were quick to show their dismay.

Leeds released a statement on Monday. It read: “The vile abuse directed at Ezgjan Alioski and Nicolas Pepe on social media after yesterday’s Premier League game with Arsenal will not be tolerated by Leeds United.

“We will work closely with the police and the footballing authorities to ensure those responsible are identified and punished.”

Arsenal followed suit. They added: “We utterly condemn the vile abuse directed at Nicolas Pepe and Ezgjan Alioski on social media following our match against Leeds.

“This is completely unacceptable and we will be working with the police and authorities to do everything we can to trace and prosecute the culprits.”

He said: “Considering how early we got Pepe sent off we have to take it. I never like a draw but in the circumstances, it’s a point. It is unacceptable.

“The first half there were two different periods. The game broke a bit. We started to give the ball away and led to them having the space to break.

“The second half it was a matter of defending well and staying patient and using the pace of our players in the space they were leaving.” 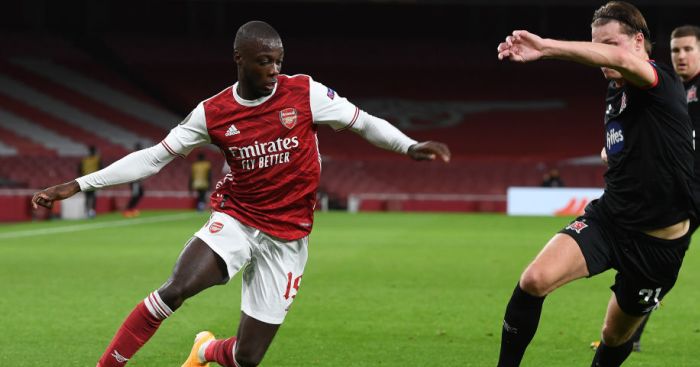 Pepe’s agent, Samir Khiat, was quick to defend his client.

Khiat claimed that the pressure of being the club’s record signing was a burden.

He told L’Equipe “Nicolas did well at Lille. We are always expecting more from Nicolas Pepe which is normal. He has been transferred to Arsenal for a consequent transfer fee

“When you look at the chances created by Arsenal for the past two seasons, Pepe has been the attacking player who created most of the chances with Aubameyang.

“He is still adapting. And he is requested to perform better, which is normal. He has been transferred for an important fee and he knows it.

“Nicolas is not cheating, he is not a cheater. He maybe needs more time to adapt. But it will eventually work well.”

#6 Recruit Lillie Nordmann Is in California, but Not Enrolled at Stanford

Jurgen Klopp unsure whether Liverpool will sign centre-back in January