Jurgen Klopp claimed that Liverpool’s 1-0 win over Ajax was one of the club’s best Champions League nights in his time in charge.

Liverpool claimed the victory they needed to advance from their Champions League group thanks to Curtis Jones’ clever finish.

The result means Liverpool win their group with one game to spare, giving Klopp an opportunity to rest some players in the final match against Midtjylland next week.

Before then, though, he will be reflecting on what he saw against Ajax – and he was eager to highlight how good it was.

“Honestly since I was at Liverpool that feels like one of the biggest Champions League nights,” he told BT Sport. “Without supporters in, it was the most important, most difficult, most exceptional.

“With the circumstances, there hasn’t been much to smile about, it’s been tricky, and the boys throw themselves into the game. Robbo [Andy Robertson] has a proper knock on the ankle and pushes himself through, Hendo [Jordan Henderson] with a sore back, Gini [Wijnaldum] – I have no words for him.”

Another midfielder who impressed was Jones, who scored his first ever goal in the Champions League to separate the two sides.

The academy graduate has been making the most of the opportunities coming his way, and showed what he is capable of again by getting a goal to cap off a performance that made Klopp proud.

“Curtis is a really good kid, a good player and I am happy to have him around. Sometimes with injuries there is always an opportunity and he has taken it.” 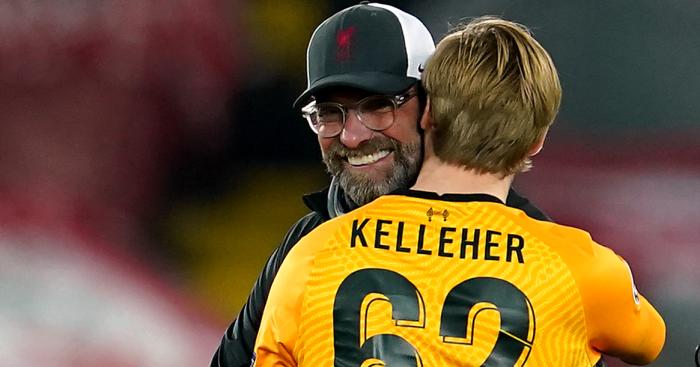 While Jones made the decisive impact at one end, fellow academy graduate Caoimhin Kelleher did at the other.

The Irish keeper was making his first Champions League appearance as he had to deputise for Alisson Becker – and he made a few good saves to mark it with a clean sheet.

Klopp explained why he chose Kelleher instead of the more senior Adrian, praising the youngster for his calmness on the big occasion.

“I really think Adrian has done a fantastic job for us, he kept a lot of clean sheets, played everywhere,” Klopp said. “But now we needed the natural football playing ability of Caoimhin Kelleher.

“He is a good shot stopper as well. We made that decision but you never know how they are going to cope. I am really happy with how calm he was and how good he was.”

A third academy player to produce a good display was Neco Williams, who has come in for some criticism recently but redeemed himself by getting the assist for Jones’ goal.

Klopp revealed he has spoken with the player about his potential – insisting he can get even better still.

“We had a long talk with Neco Williams this week,” he said. “We think he has more in the locker than he has shown so far.

“The season started ater a difficult summer with lockdown, a short pre-season and then Trent Alexander-Arnold is out.

“Neco was not in the best shape but he’s on the big stage – tonight he showed glimpses. He can be so much better still.”

The post Klopp explains why win over Ajax was one of his best with Liverpool in Champions League appeared first on teamtalk.com.

Povetkin's Promoter: Decision Soon on Whether or Not Whyte Rematch Lands in January