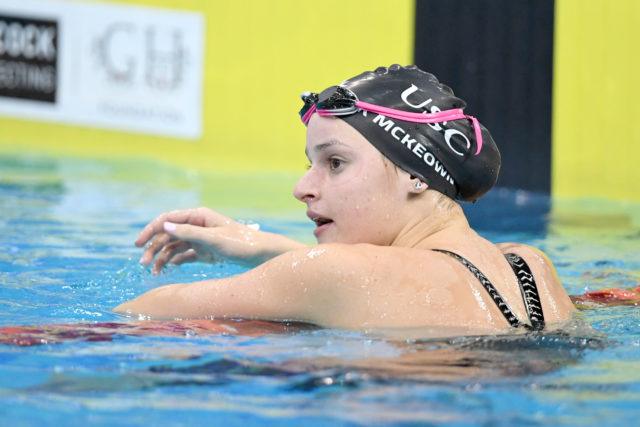 Australia’s Kaylee McKeown already threw down the fastest 100m backstroke mark of her career en route to a new national record yesterday and the teen was back at it in the 200m back tonight.

Yesterday while competing at the 2020 Queensland Medal Shots Long Course Preparation Meet, USC Spartan McKeown scorched a new lifetime best of 58.11 to overtake Olympian Emily Seebohm‘s longstanding Aussie standard of 58.23 put on the books at the 2012 Olympic Games. You can read more about McKeown’s 100m back stunner here.

McKeown entered an entirely new level in the 2back tonight, hitting a menacing time of 2:04.49. That not only laid waste to her previous career-quickest of 2:05.83 from just this past January, but it marks the first time an Aussie woman has ever gotten under the 2:05 barrier in the event.

Seebohm held the Aussie national standard with the 2:05.68 she produced for gold at the 2017 World Championships. That was a special swim for mainstay Seebohm, as she represented her nation’s sole individual event medal there in Budapest.

McKeown took silver in this 2back event at the 2019 FINA World Aquatics Championships behind World Record-setter Regan Smith of the United States. Smith hit 2:03.69 for gold after producing a WR of 2:03.35 in the semifinals while McKeown posted 2:06.26 for silver in Gwangju.

The skinny on how Hamilton can snatch the title in Turkey

Exclusive: Swimmer Lilly King talks International Swimming League and training during a pandemic | In The Zone