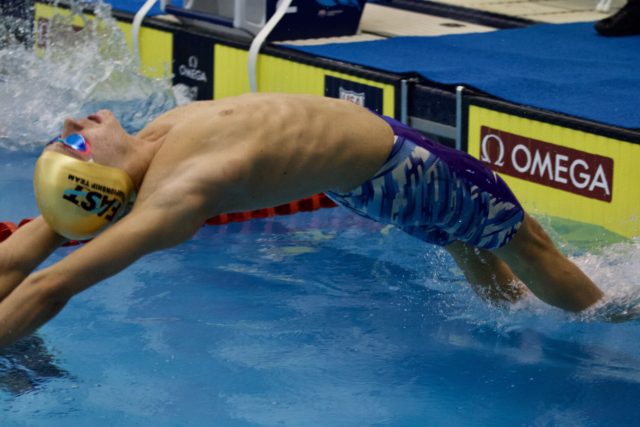 “We have no idea what will happen in the days after States so this is a good opportunity to race.”

Those were the words attached to the Flood Aquatics Closed Invite on Monday. The sanctioned meet saw swimmers from Flood Aquatics and nearby Saint Andrew’s Aquatics come together the day after the Class 1A Florida High School State Championship Meet to capture tapers, especially in events that aren’t part of the high school schedule.

Among the swimmers taking advantage of the opportunity was Josh Zuchowski of the host Flood Aquatics. Both a National High School and National Age Group Record holder, the junior at The King’s Academy swam a single event, the 200 yard back.

In that race, he swam a 1:44.46, which knocked exactly 1 second off his previous best time of 1:45.46 set at Winter Juniors – East in December. That also gives Zuchowski, the #3-ranked recruit in the class of 2022, the top time in that event among high school juniors. It also breaks his own Florida Gold Coast LSC Record

Zuchowski wasn’t the only swimmer who posted a best time at the meet. Among the other breakthroughs:

O’Connor Ponders Next Steps After Withdrawing from British Trials

Basically Every Aussie Is Racing This Week At Virtual C’Ships

Matt King Announces Transfer to Virginia After One Year at Alabama