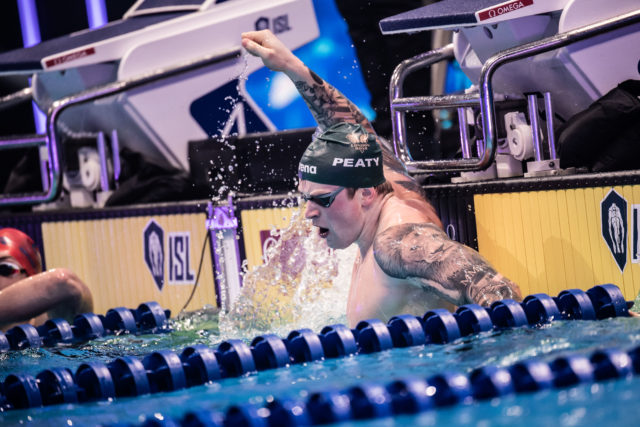 In this weekly series, we’ll track stars of the week’s ISL meets, both established stars and rising stars.

Stars of the week will profile top-end swimmers who outperformed expectations for the week. Just winning events isn’t necessarily enough.

Obviously, Dressel has set the bar pretty high, but he overcame even that lofty standard this week. A world record in the 100 IM was the headline-grabber: Dressel became the first man ever under 50 seconds, another barrier-shattering performance he can add to a career full of them.

Dressel hasn’t yet gotten to swim a skin race in free or fly. Yet he still leads the league MVP ranks by a whopping 71.5 points.

Coming off a week of rest, Peaty blew up for London, giving the Roar a sliver of hope that they could pull out next week’s league final if things break right. Peaty hit his career-best in the 50 breast (25.50) and then bettered that in the opening round of the skins (25.48). He went on to sweep all three rounds of the skins, taking two jackpots along the way and staying very consistent across all three rounds (25.48/25.74/25.70). He’s the #2 swimmer in the league in the 50 breast, and the top swimmer advancing to the final.

Peaty’s biggest contribution might have been his 54.84 split on the medley relay. That’s widely believed to be the fastest 100 breast split in history, though relay splits aren’t necessarily maintained in any comprehensive database. That huge split allowed London to break the league record in the men’s medley relay, winning the relay and setting up Peaty’s massive skins win.

Peaty also broke the world record in the 100 breast (55.49), one of two world records set by London this week. He was the second-highest scorer in his semifinal, missing meet MVP by just 12.5 points.

We’ll get all three world record-setters recognized right at the top. Toussaint had a massive 50 back in semifinal #1, going 25.60 to break a six-year-old world record.

That’s going to allow London a prime opportunity for skins points if they happen to get themselves into position to pick the women’s skin stroke. The Roar have elite options in back and breast (Alia Atkinson), which seem two likely strokes to be selected if either London or Cali wins the medley next week.

London had a number of standouts. Scott clearly showed up to swim in the semifinal round, hitting two league-leading times. The Brit was 1:51.66 to win the 200 IM, taking over the top time in the league this season by four tenths of a second. He’s just nine tenths off the league record held by Daiya Seto.

Scott was also 1:40.76 in a massive 200 free win. He leads that ranking by a half-second over Energy’s Danas Rapsys, and Scott also set a league record with that swim.

Swimming in her final race for the Tokyo Frog Kings this season, Ohashi remained undefeated for her ISL career in the 400 IM. She capped her season with pizazz, going 4:23.25 to shatter the league record by more than two seconds. That race took a very gutsy win over London’s Sydney Pickrem, who was just four tenths behind. Ohashi also won the 200 IM, setting a league record by a tenth of a second.

She’ll finish the season as one of the top-scoring rookies in the entire league.

Rising stars are lesser-known swimmers who had high-impact performances this week.

Cali rookie Stewart had a breakout week in the backstrokes. Stewart was 22.84 in the 50 back, taking second to world-beater Ryan Murphy. He followed that up by making the final of the men’s 50 back skin race – he’s just the second Cali man this year to make a skins final, joining Caeleb Dressel.

Cali’s men stepped up in a big way, and Ress had a big hand in that. Ress split a wicked 45.8 on a free relay as Cali smashed its season best, then he topped himself with a 45.3 split on Cali’s medley relay, which also dropped significant time. Ress was 46.3 and 46.4 in 100 freestyles, and also cracked 21 seconds for the first time in the 40 free, going 20.97.

Dean had one of the swims of the meet in semifinal #1. His 3:37.87 handed Energy Standard’s Danas Rapsys his first-ever loss in the 400 free, and moved Dean up to #3 in the league ranks this year. Just two of the top five in league ranks (Dean and Rapsys) will compete in next week’s final.

Pilato is becoming a big enough name that she might not even qualify for “rising stars.” Either way, her week merits mention. The 15-year-old Pilato was 28.86 in the 50 breaststroke in semifinal #1, tying the league record held by Lilly King. Pilato also outdid the very hard-to-beat King on the medley relay, splitting 1:03.19 – King was just 1:04.2 this week and has been 1:03.0 at best this year. King & Pilato are tied for the #4 performer of all-time in the 50 breast, and both will have a shot to move up that list next week.

Houston Picks Up 59.8 LCM Butterflier Adelaide Meuter of France for 2021