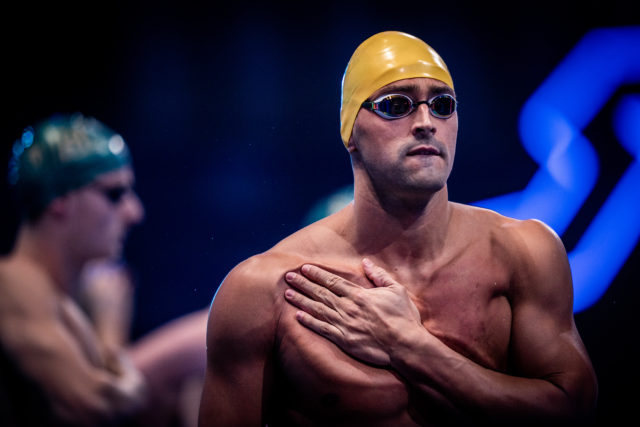 The LA Current will again use rising backstroke star Dylan Carter in the men’s skin race, while Cali will add Justin Ress. Neither swam the 50 back yesterday.

Leaving Ress out of yesterday’s individual 50 back appeared to be a strategic gambit to keep him fresh for the extra-important medley relay, which sits just two events after the 50 back in the ISL schedule. Cali didn’t quite win the relay, but Ress’s blazing 45.3 anchor leg very nearly ran down LA, and gave Cali its best men’s medley relay time this year by three seconds.

Carter swam only the 50 free and the men’s free relay yesterday – though the 50 back comes directly after that free relay with only a short session break in between. It appears the LA Current were probably trying to lighten the load on Carter, who  came in second last week in a 50 back skins race.

You can see the full day 2 start lists here.

We’ll also see a couple changes in the women’s skin race field compared to yesterday’s 50 breast. The top four will remain the same: that’s Cali’s Lilly King/Molly Hannis and Iron’s Jenna Laukkanen/Ida Hulkko. But LA will switch Anastasia Gorbenko into the field in the place of yesterday’s 8th-placer Kierra Smith. Gorbenko has been the team’s fastest 50 breaststroker this year, but didn’t swim the 50 breast yesterday because she was more needed in the 200 IM one event earlier.