ISL 2020: MVP & Rookie of the Year Watch Heading Into Final 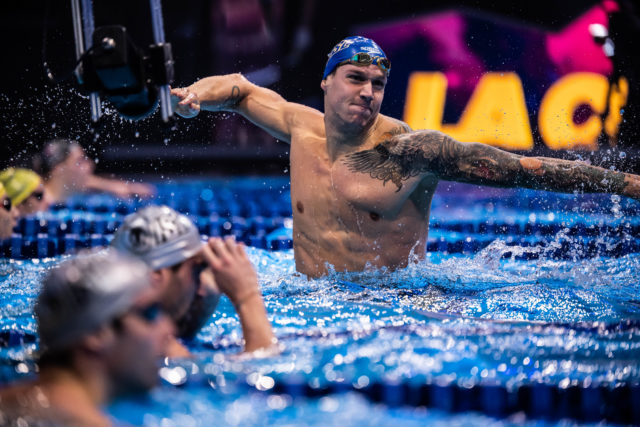 We’ve got just one meet left: the ISL final. So it’s time for one last check-in on who is leading the MVP and Rookie of the Year races.

The ISL determines MVP based on individual points tallied throughout the season, so this one is more of a mathematical projection of who could move up or down the ranks in the postseason:

This one is pretty much sewn up at this point. Dressel has scored 367.5 MVP points across the season and leads everyone else by 71.5. The absolute best weeks for any swimmer have been 80-90 points, and Dressel has scored 52+ in every meet this year, so unless the league does something like last year and doubles the points for the final, it would be extremely hard for anyone to make up 71.5 or more points on him in one week.

Not to mention that Dressel is getting better with each passing meet. This week, he hit season-bests in all of his individual events (50 fly, 100 fly, 50 free, 100 free, 100 IM) and has a great shot to win all five races in next week’s final.

Ryan Murphy, LAC: Murphy is currently third in season MVP points. As we said above, it’s highly unlikely that anyone catches Dressel, but we do think Murphy has a good chance to be second across the season. He’s only 3.5 behind teammate Gastaldello, and he outscored her by ten this past week. Murphy seems to have a great shot at swimming the skins again next week, and his prospects are probably better than Gastaldello’s to score big.

Beryl Gastaldello, LAC: Gastaldello has taken the Dressel approach, swimming a wide event range even if she hasn’t always gotten skin race opportunities. She’s currently #2 in the league in season points and hasn’t lost a 100 fly or 100 IM yet. Her path is going to get pretty tough next week, though, with Energy Standard’s group of standout flyers and freestylers joining the mix. We also figure the skins are less likely to go her way and likely to trend towards breaststroke or freestyle.

Lilly King, CAC: King and Murphy are tied for the league lead with 4 skins wins apiece. Cali is now 1.6 seconds behind Energy Standard’s season-best in the medley relay, and we might just see them lose their first medley ever. That would pretty much close the door on King’s MVP hopes, as she’ll need the breaststroke skins and a bunch of jackpot points to overcome her teammate Dressel, or either of the LA Current swimmers ahead of her.

ROOKIE OF THE YEAR WATCH

There’s no indication that “rookie of the year” will be an actual ISL award. But we’re still interested in the most impactful newcomers to the league this year.

Our rules: a rookie cannot have competed in the ISL last year even once. Outside of that, any ISL newcomer is eligible regardless of age or actual world swimming experience. You can see a full list of swimmers to score points in the 2019 ISL season here.

You could pretty much give Sakci the Rookie of the Year trophy now. He won’t get a chance to compete in the final, but he’s made his mark in five meets so far, sitting 7th in leaguewide MVP scoring. Sakci has also won the skins twice and is one of just two rookies to win a skins race. Plus, he holds the league 50 breast record.

Benedetta Pilato, ENS: Pilato has a chance to make a really late case for MVP, swimming extremely well in the semifinals and looking like a real threat to Lilly King‘s breaststroke dominance. The 15-year-old Pilato tied King’s ISL record in the 50 breast this week, and also sits #3 in the league in the 100 breast.

Abbey Weitzeil, LAC: Weitzeil has been a massive relay weapon for LA, and sits 4th in the league in the 50 free and 100 free. She’s got one skins final appearance and has dropped some huge relay legs for LA.

Read the full story on SwimSwam: ISL 2020: MVP & Rookie of the Year Watch Heading Into Final