Griezmann points finger of blame; admits Messi said he had ‘screwed him’

Antoine Griezmann admits his protracted move to Barcelona upset Lionel Messi but has denied reports of a rift between the pair.

Griezmann, 29, earned a big-money move to the Nou Camp in the summer of 2019 after his Atletico Madrid exploits. The France international notched 133 goals from 257 outings for the capital outfit.

He looked set to join the Catalans in 2018 but instead penned a new deal with Los Rojiblancos until 2023.

The talented forward managed just nine goals from 35 La Liga outings last term and has struggled in 2020-2021. He has found the net only twice from seven starts and been regularly slated in the media.

An interview given by his former agent and uncle has now fanned the flames. It has been alleged that Messi was not welcoming to Griezmann on his arrival. However, the player has distanced himself from those words, and his uncle will not be on his Christmas card list.

Speaking on Universe Valdano in quotes carried by Marca, he said: “I said in my presentation with Barcelona that I didn’t want to speak off the pitch but on it, but I think it’s time to put things right.

“I’ve been putting up with things and comments for a long time, and enough is enough. I stopped having a relationship with (former representative Eric Olhats) the day I got married.

“He speaks because neither my father or my sister will speak to the press. Leo knows I have a lot of respect and admiration for him. My uncle doesn’t know how football works, and in the end the journalist got that phrase out of him.”

Messi moves on from spat

It seems as though Messi was not impressed with the way his team-mate conducted himself during the transfer process.

The Argentinian had made no secret of his desire to play alongside Griezmann at the Nou Camp. It was the initial snub that irked the club legend but all now seems to be forgotten. 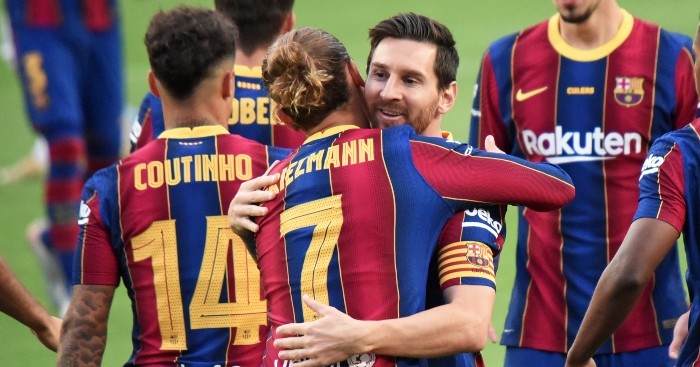 “I spoke with Leo when I arrived and he told me that when I rejected the first chance to go I screwed him because he had asked for it publicly,” added Griezmann. “But he told me he was with me, and I notice that every day.”

The former Real Sociedad star will now need to let his football do the talking. Barca find themselves in the unusual position of being in the bottom half of the table after eight games.

The post Griezmann points finger of blame; admits Messi said he had ‘screwed him’ appeared first on teamtalk.com.