In a controversial encounter, the Portuguese playmaker’s penalty was the only goal of the game. That followed a handball in the area early in the second half.

But Fernandes needed two bites of the cherry after Johnstone saved his first attempt.

The former United tree dived low to his left to keep the ball out. However, he was ruled to be off his line when making the save and Fernandes was given the chance to atone.

With the second attempt, he changed his run-up and performed a hop, skip and a jump before firing the ball home.

But Johnstone believes the technique for the re-take shouldn’t be allowed.

His comments came via a reply to an initial tweet from Adam Sells, managing director of Sells Goalkeeper Products.

He wrote: “Moving off the line early yesterday, saw @samjohnstone50 denied a great penalty save.

“For many years I have held the view that the keeper should be allowed to move anywhere in the six yard box from a spot kick. Harder to score? More realistic? Easy to administer?”

Johnstone quoted the tweet, adding: “And a striker shouldn’t be able to hop skip and jump before kicking it.”

Johnstone gutted not to have taken something 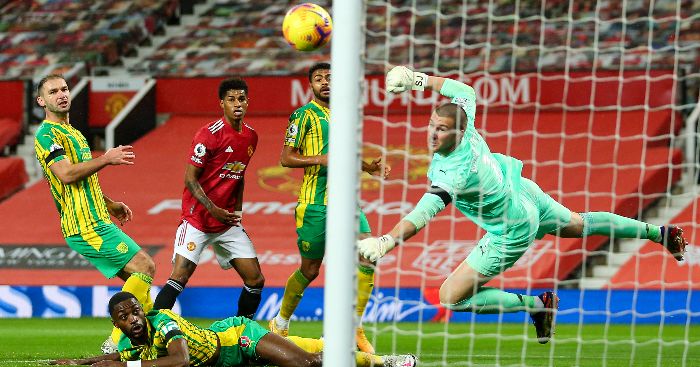 The West Brom No.1 was hugely disappointed after the 1-0 loss.

“We played well,” he told the West Brom website. “The lads are gutted. We were under pressure for some of the game, but still created good chances.

“I made a few saves and to not even get a point is really frustrating but hopefully we can take the work-rate from the Tottenham game, tonight and then hopefully the results start swaying our way.

“You don’t really want to face one penalty, two is frustrating but it’s a new rule so it’s difficult.

“We rode our look at times but we hit the crossbar, had a couple of good chances and I think a point would’ve been fair.”