Burnley manager Sean Dyche pointed to a moment of courage from Nick Pope that typified the unbroken spirit Burnley possess in their victory over Crystal Palace.

Speaking in his post-match press conference (via Lancs Live), Dyche said: “I think there has been a lot of working going into it over the last few games. It is our third clean sheet in five games so that was something to build on.

“We created three golden chances and scored one of them.

“Some of our football particularly in the first half was very good and I thought we kept them down to very little.

“In the second half they got nervy, even I was wondering, we missed two golden chances and I am pleased for them to see it through.

“I am pleased for Woody who has been sticking at it.

“He finally got a nice chance and it was a great finish, Jay has worked hard and is a different kind of player. He gets in the pockets and can link the play for us so I thought there was a lot of good performances.

“We were good defensively, resolute and solid and also a threat when we went forward in the right way.”

The news was not all positive from a Burnley perspective, however, with Dyche delivering an ominous sounding injury update on the injured Robbie Brady.

“I will have to wait and see but I will find out more tomorrow,” added the Clarets boss. “It looks like he’s done his hamstring.” 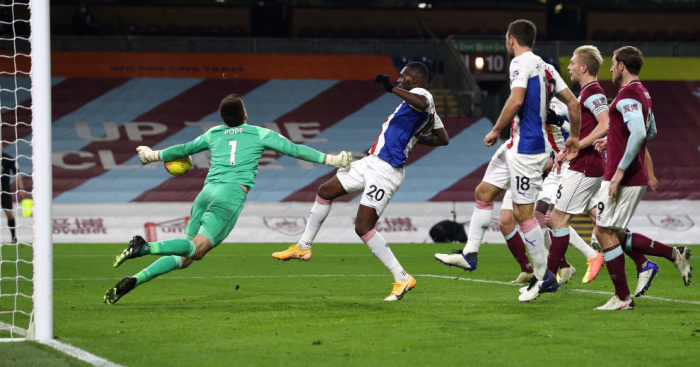 Speaking on the superb performance of England goalkeeper Nick Pope, Dyche said: “The first half one I think he would expect to make, the second half one is a fantastic save and that really encapsulates the mentality of our group.

“A couple of weeks ago at Brighton we were just getting blocks and showing what it means and I thought Popey’s save really encapsulates what it means to be in our group, not just for his part but the whole team.

“He has flung himself and made a great save. He could get hurt, does get a knock in the process and that is what it takes, that desire to make sure the team comes through. I thought it was a really good moment for us because it shows the feeling and the spirit in the camp.

“I don’t think that has wavered, I think everyone has kept their noses pointing in the right direction and kept the right mentality to turn things round and we have made a start.

“That is all it is and there is loads of work to be done but we have made a start.”

The Managers We Need to See on I'm a Celebrity

Elloh and Boho score as Logrono lose to Levante

The Manchester United lineup that should start against Aston Villa

Fewer touches than Hart: Spurs passenger who made only 8 passes badly let Jose down – opinion