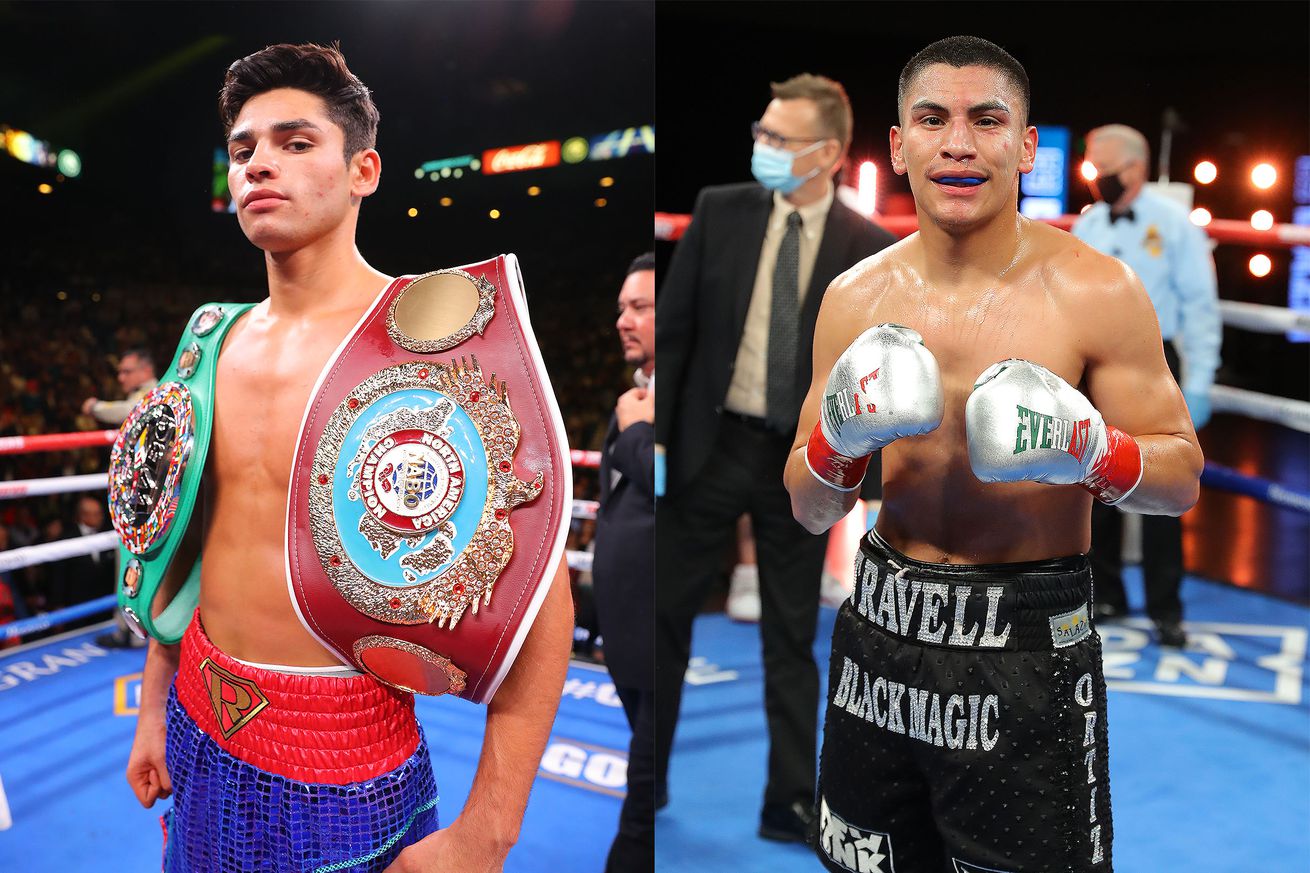 Canelo Alvarez is out, and Golden Boy needs a new top draw. Will it be Ryan Garcia or Vergil Ortiz Jr who emerges best?

Canelo Alvarez is out at Golden Boy. That is a fact, and another fact is that the 29-year-old Mexican superstar’s departure leaves Oscar De La Hoya’s 18-year-old promotional company without a current, true top drawing card.

Some speculate that Alvarez leaving could be the end of Golden Boy, but that is, at least in my opinion, clearly going too far. The folks at Golden Boy have weathered storms before, the biggest when nearly everyone advised by Al Haymon who had been fighting on Golden Boy shows for years was suddenly out from under their umbrella when Haymon and his partners formed Premier Boxing Champions over five years ago. Golden Boy didn’t have almost any of those Haymon-advised fighters under promotional contract, which a lot of people knew at the time but GBP pretended was a shocking realization when former CEO Richard Schaefer resigned in 2014.

In the end, Golden Boy had to regroup. They lost almost every notable fighter who had been highlighting their cards in recent years. Canelo Alvarez was the key part of that. Alvarez continues his rise to superstardom, becoming the headline attraction for GBP and HBO in that network’s final years in the sport, and then led Golden Boy to a good deal with DAZN, which is still in place — as may be Canelo’s relationship with DAZN, albeit on a more fight-by-fight basis than the very bad historic contract he signed in 2018.

Now, with a long-simmering bitterness between Canelo and Oscar De La Hoya’s group finally ended, Golden Boy once again has to regroup. It’s never easy to do this, but last time they had a star on hand with superstar potential, and the guy delivered on it. This time, they have two young fighters who themselves might be on the cusp.

Lightweight Ryan Garcia and welterweight Vergil Ortiz Jr both have potentially huge appeal. They’re exciting to watch, they’re young, they’ve got marketable personalities, and they’re in good divisions, at least in theory, to get big fights sooner than later, or whenever the time is felt to be truly right.

The 22-year-old Garcia (20-0, 17 KO) has the hardcore fans split, but if Golden Boy were only looking to engage hardcore boxing fans, they’d be content with running entertaining, low- and mid-tier televised events at the Fantasy Springs in Indio forever. They’re not, though. Golden Boy has been a home for star fighters since its beginning in 2002, and through every misstep or challenge, they’ve continued to have star fighters.

Garcia has sort of redefined how boxers can market themselves, building an enormous following on social media before ever having what would be considered a top-level fight. He’s done that by being particularly outgoing with those platforms; he actually will reply to fans and whatnot. He also talks a lot of smack on Instagram and Twitter, which keeps his name floating around. He’s got potential grudge fights with the likes of Teofimo Lopez, Devin Haney, and Gervonta “Tank” Davis in the near future.

Garcia has the marketing part down — in some ways to Golden Boy’s frustration, as Garcia has twice openly beefed with his promoters in 2019 and 2020, confident that he has some rare leverage. The in-ring skills look good, but now they have to be proven against better opposition than Romero Duno and Francisco Fonseca and Jayson Velez. To Garcia’s credit, he’s signed to do that against Luke Campbell. The fight was set for Dec. 5, but Campbell came down with COVID and it has been postponed, though it’s still on. That’s not really a “do or die” type of fight for Ryan, in reality he could lose that, rebound, and still be a big star, but it’s definitely a huge test for where he is now, and will say everything about his chances of graduating from star to superstar.

The 22-year-old Ortiz (16-0, 16 KO) looks even more like he has it in the ring. His wins over Mauricio Herrera, Antonio Orozco, Brad Solomon, and Samuel Vargas aren’t actually significantly better than what Garcia has done to date, really, but his standing with the diehards isn’t so split. I think everyone likes Ortiz; he’s “quiet” and “humble” and wrecks his opponents, instead of being “loud” and “arrogant” and wrecking his opponents, and as a point in Ortiz’s favor, he’s never had a sort of struggle night like we saw Garcia have a little bit against Carlos Morales in 2018.

Ortiz is in sort of the same position Terence Crawford is at Top Rank, though, in that he’s fighting in a division largely ruled by the names at PBC. Ortiz, in fact, is even less likely to get a fight with a PBC name than Crawford is; he might not be the threat Crawford figures to be, at least not yet, but Golden Boy and PBC have an even icier relationship than Top Rank and PBC.

The biggest fight available any time soon for Ortiz, in fact, might be Crawford himself, but that may have to take place in the next 11 months, and there’s a good argument that Ortiz is simply not ready for Bud. Ortiz has it tough at 147 right now, because even a lot of the better “next step” opponents he could face are PBC guys, too.

Neither young fighter will have it easy. To break through to that superstar level, you have to get star-level fights. Garcia could definitely get Haney, a Matchroom/DAZN fighter, or maybe Lopez, a Top Rank guy, but the Lopez fight would be tough to work through ESPN, which see Teofimo as an anchor talent, and DAZN, who will hope that Garcia can be one for their side. Ortiz, too, will have to find a way to get good fights.

They’re both very young, they both still have a lot to prove, but of the current Golden Boy roster, these are the two guys who have the clearest “superstar” potential.

Think more someone on the level of the current cornerstones for various groups. Teofimo Lopez, Terence Crawford, Tyson Fury, or Vasiliy Lomachenko at Top Rank. Anthony Joshua at Matchroom. Errol Spence Jr, Deontay Wilder, and maybe soon Tank Davis and/or the Charlos at PBC. Those kind of guys.

So today’s question: which one will be the new “top dog” at GBP, Garcia or Ortiz? Do you see them both becoming top names … or maybe neither of them?

Top 5 Swimmers In Each Event Heading Into 2020 ISL Final

Haye: I'd Be Surprised if Fury-Joshua Happens Before November

The year ahead for amateur boxing