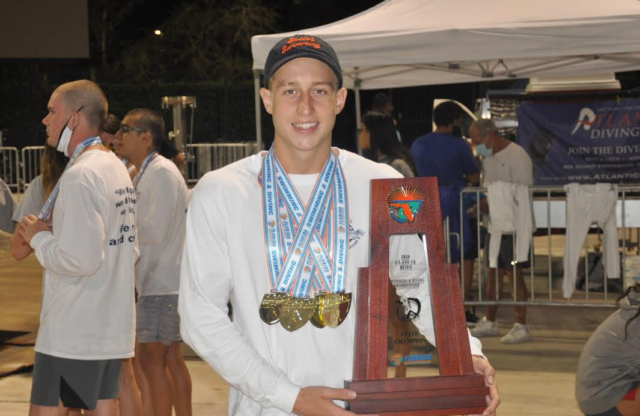 The record withstood an entire generation of some of the school’s greatest swimmers, including Olympians Ryan Murphy, Joseph Schooling, and Santo Condorelli. (Note: Although American Caeleb Dressel swam for the Bolles School Sharks club team as an age-grouper, he did not attend the Bolles School itself.)

“Prior to the race, I was feeling nervous as this was the first big race I had to swim since joining Bolles, but as I stood behind the blocks, I could feel the energy from my teammates cheering me on and I remembered the hours I spent grinding in the pool,” Dupont said while reflecting on the race. “As I led the race from the start, my confidence increased, 50 by 50 the lead increased between myself and my competitors, I kept my mind on the race and focused on maintaining my speed and technique. When I looked up at the scoreboard, I was ecstatic. The 1:35.60 was a time I was not expecting, after the race, my teammates congratulated me and at that moment I realized that I am capable of going faster.”

He acknowledges that in order to swim a faster time, he has several things to work on.

“After carefully analyzing my video, I concluded that I can work on 4 specific things. Firstly my starts, specifically on my entrance to the water, making sure that my body is in the correct position. Secondly, my underwaters, by increasing the frequency of my dolphin kicks and exaggerating the movement of the hips coming all the way from the core. Thirdly my turns, by “attacking the wall” and compacting my body so that the transaction between every lap is even faster. Lastly, the frequency of my stroke, by founding the perfect tempo and making every cycle the most efficient possible.”

Dupont recently enrolled at the Bolles School, leaving his native country of Mexico, where he had competed in several national-level competitions. 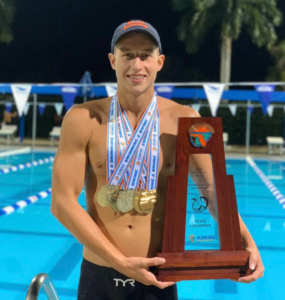 Since coming to the United States, his training regime has changed drastically, as reflected in his impressive swims. Currently, he says his schedule is, “On Monday, Wednesday and Thursday, we have a double session, Tuesday and Friday we have a single afternoon session, on Saturday we have a morning session and we use Sunday as a recovery day.” 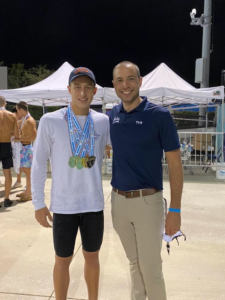 Although COVID-19 has left much of the swimming up in the air, Dupont is still targeting several goals, “I want to break the state record not only on the 200 freestyle by Caeleb Dressel set in 2013,” he says, “but also the state record of the 100 Freestyle by Ryan Murphy set in 2013.” Dressel’s record currently stands at a 1:34.69, while Murphy’s is a 42.95.

Swimmer Gives Back to Community for Thanksgiving

2020 Swammy Awards: US Coach of the Year, Ray Looze