Home > Swimming > #6 Recruit Lillie Nordmann Is in California, but Not Enrolled at Stanford

#6 Recruit Lillie Nordmann Is in California, but Not Enrolled at Stanford 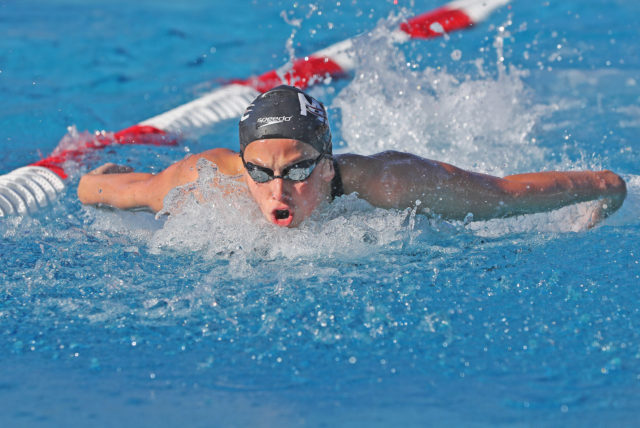 US National Teamer Lillie Nordmann has arrived in California but is still planning to compete for the Stanford Cardinal varsity squad until next season, head coach Greg Meehan told SwimSwam this weekend.

Earlier this year, Nordmann, who finished high school in the spring, said on the SwimSwam Podcast that she would be deferring her start at Stanford because of the uncertainty of the ongoing coronavirus pandemic. Thus it became a surprise when she showed up on the results of yesterday’s meet between Stanford-based swimmers and Cal-based swimmers.

Ultimately this move doesn’t have a huge net effect on eligibility, given that the NCAA has given winter sport athletes, like swimmers, an extra season of eligibility because of the uncertainty over the pandemic, structuring her time this way does allow her to focus on preparing for long course and the US Olympic Trials next summer.

Nordmann was the 6th-ranked recruit nationally in the high school class of 2021 and was part of Stanford’s top-ranked recruiting class. That class also lost the services of World Record holder and #1 recruit Regan Smith for this season after she decided to stay home in Minnesota and train.

Nordmann’s older sister Lucie also swims at Stanford, though she did not participate in this weekend’s meet.

Read the full story on SwimSwam: #6 Recruit Lillie Nordmann Is in California, but Not Enrolled at Stanford

Kaylene Corbett Gets Under Olympic Qualification Cut With 2:25.18 200 Breast