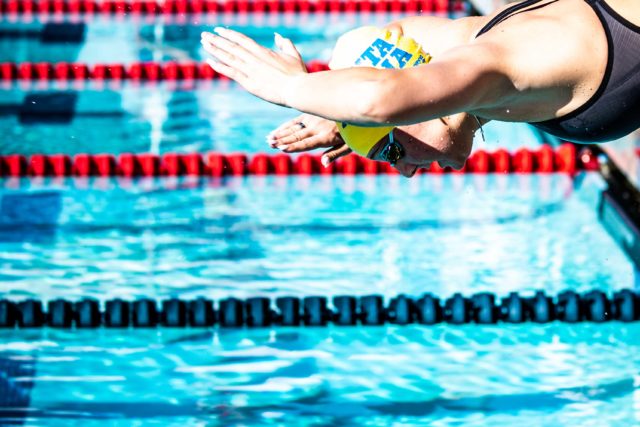 The USA Swimming 2021 18 & Under Spring Cup started yesterday with competition taking place in four different sites across the country. At the Irvine site, due to the state’s current regulation’s regarding the pandemic, only swimmers based in California competed. The first day of competition featured just two races, the women’s 800 free and the men’s 1500 free. Both events were swum as timed finals.

In the women’s 800 free, it was USA Junior National Team member Claire Tuggle who came away with the fastest time. Tuggle led the field by nearly 12 seconds, touching in 8:43.97. While she finished far ahead of her competitors, she was still well off of her best time, an 8:38.55 that won the event at the 2019 Junior National Championships.

The rest of the field behind Tuggle was much closer in times, with four seconds separating the next two finishers, Mattea Sokolow and Abigail O’Sullivan. Sokolow touched in 8:55.42, while O’Sullivan stopped the clock in 8:59.88.

Finishing just off in the podium in the race was the youngest competitor in the field, 12-year old Kayla Han. Han shaved almost 4-seconds off of her best in the event, touching in 9:02.82. Despite the time drop, she is still ranked as the 11th fastest performer in the 11-12 age group ever. Only four girls have dipped below the 9:00 barrier in 11-12 age group history, including Claire Tuggle, who ranks 3rd.

In the men’s 1500 free it was Matthew Chai of the Fullerton Aquatic Sports Team who came away with the fastest time. The 17-year old won by a margin of over 18 seconds, touching in 15:47.11. While Chai was the only competitor who finishing below 16:00 in the race, he was still well off of his best time of 15:39.65 from earlier this year. That time currently ranks Chai within the top-20 American performers in the event this year.