By Reid Carlson on SwimSwam 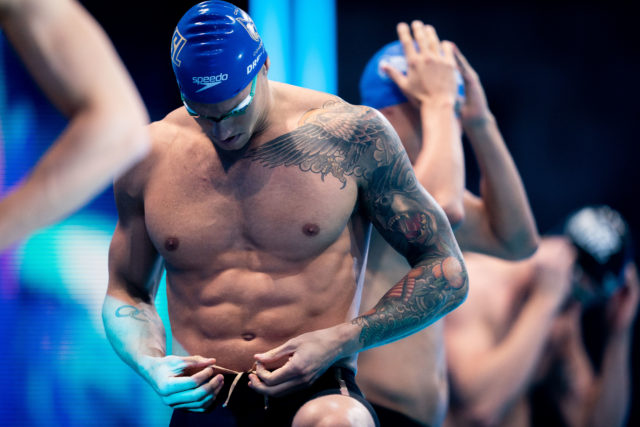 Today decides who advances and who subsides.

For real. That’s it. I ain’t Chaucer or Shakespeare (just someone that thinks swimming is pretty cool).

Day 1 of the ISL 2020 Semifinal #2 did not witness the World Records of Semifinal #1, though it pretty well let viewers determine who the four teams in the Final would be. Nonetheless, it ain’t over till it’s over, which is why we’re still here.

On day 1, the Cali Condors established a 27-point lead over rival LA Current, though with the LA Current men won the 4 x 100 medley relay and therefore earned the option to choose the style of the 50 Skins competition, giving the Current at least one method of regaining significant ground on the ‘Dors with Ryan Murphy who is undefeated in the three backstroke skins he has contested thus far this season. However, the Cali women were victorious in their 4 x 100 medley relay, allowing them to unleash Lilly King and Molly Hannis (potentially) in the women’s 50 breaststroke skins, a duo that would be hard to beat.

Caeleb Dressel and Tom Shields were magnificent on the relays on day 1, and they’ll square off again in the 50 fly, alongside the 50 LCM butterfly World Record holder Andrii Govorov. Dressel will also play a major role on Cali’s Mixed 4 x 100 Freestyle Relay where points are worth double.

The Toronto Titans and Iron, the Hungarian home team, are currently battling it out for third place in the team standings, though the day 2 events bode well for Iron, especially if Katinka Hosszu and Ranomi Kromowidjojo are on their game–Kromowidjojo was vital on day 1, though Hosszu seemed fatigued. Toronto, meanwhile, will need to show the same strength it did on day 1 in both the breaststroke and the IM in order to have a chance at finishing second or third. If the Titans can do that and if they can rise to the occasion in the 100 and 200 freestyles, where they are also strong–as well as the relay–then perhaps they can edge their way into the final. It’s a long shot, but it’s not impossible.

Cali’s Hali Flickinger will be one to watch in the 200 butterfly, as will LA’s Shields. Though it would not be tactical to put Shields in the 100 backstroke on day 2 it is interesting to consider his potential in this SCM venue given that he is a former NCAA champion in the 100 yard backstroke, but at this point we’re getting a little too swim-nerdy and speculative, so please stay tuned for the rest of our live recap of the ISL Semifinal #2 Day 2!

Sarah Sjostrom Doing 3 Leg Workouts Per Day, Kick is Stronger Than Ever