10 Swimmers Who Broke Through in the 2020 ISL Season 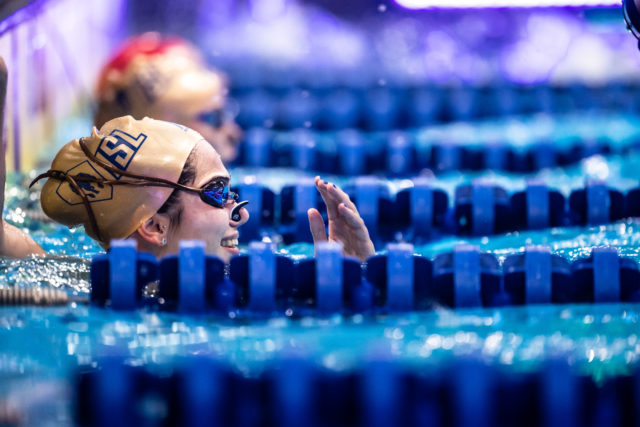 Among the glitz and the glam, the format, the presentation, the production, and the MVP battles, one of the best parts of the International Swimming League is a little less obvious.

The stars of the sport, the Caeleb Dressels and Katinka Hosszus and Katie Ledeckys, were making 7-figure annual endorsement deals and prize money packages prior to ISL, and while they’ll appreciate the prize money added on (around $300,000 for Dressel, depending on how the Cali Condors distribute their team bonus), their ability to continue training as professional athletes has not been altered by ISL.

But if this league creates a way for the next tier of swimmers to carve out a career, to keep training into their 20s, to have a purpose even if they aren’t going to make their countries’ Olympic teams, that’s the value of the ISL.

Lower-end athletes are doing better than they were before ISL, though many still aren’t making what is a sustaining salary for a pro athlete. Only 21 swimmers out of 320 earned more than $50,000 in individual prize money, in addition to their $15,000 base salaries and any distributions of team prize money.

If next season, there is a true free agent market as was planned for this season, with athletes paid different salaries based on their value, a certain segment of swimmers have made statements and will be suddenly hot commodities.

Below are a list of SwimSwam’s top swimmers who had breakout seasons in the 2020 ISL season. Keep in mind that this is focused on the 2020 season – several of the swimmers that you’re thinking of, like Beryl Gastaldello or Siobhan Haughey, actually had breakouts in the 2019 season.

Note: prize money excludes team bonus, because we don’t nkow how teams will distribute that money.

Joe Litchfield, the younger of the two Litchfield brothers participating in the 2020 season, didn’t earn as much money as his older brother, but did perform way better in MVP rankings – placing in a tie for 59th overall.

Spectacularly, Litchfield didn’t actually win a race all season long, though he was a runner-up on 6 occasions. More importantly, he was a key cog for the Breakers in a lot of spots they needed it. With Michael Andrew struggling, and a few Breakers only able to participate in very limited event lineups (Pieter Timmers, Marco Koch), he chewed up a ton of spots and generally did very well.

Formerly an IMer, and showing some abilities in fly in short course, thinking more globally, Litchfield put himself back into the conversation for Britain’s Olympic medley relay. With 3 legs (Adam Peaty, James Guy, Duncan Scott) to a gold medal caliber relay, the Brits are constantly looking to squeeze another tenth or two out of the backstroke leg where they can.

Behind Luke Greenbank, who had a good ISL season to but specializes more in the 200 back, Litchfield was the #2 British backstroker in long course last season. That’s a very young backstroke group with names like 21-year old Brodie Williams, 20-year old Nicholas Pyle, and 19-year old Charlie Brown all vying to contend for a spot, but whoever emerges from that group could come away with an Olympic gold medal.

Shane Ryan‘s 2019 ISL debut was unspectacular, to say the least. At the US Derby in 2019, Ryan’s only ISL appearance, he swam 4 races for the LA Current in place of Ryan Murphy, who sat out that meet. In 2 of those races, he was disqualified, though he showed some spark by placing 2nd in the other, the 100 back, albeit against a fairly-soft field with spots in the ISL final already decided and many big names opting to stay home.

Now racing for the Toronto Titans, Ryan was a key swimmer for the expansion club, winning 6 races in 5 meets and going 4-for-5 in non-skins 50 backstrokes. That includes tying Ryan Murphy in Match #3 and swimming his best time in the semi-finals opening skins round.

Ryan’s got a lot of twitch, and in short course he can fill a lot of lanes in the ISL format. This was a great pickup for the Titans.

In my mind, coming into the ISL season, I thought Murez’s career was winding down. I figured she’d swim until the Olympics, try to do enough to get an Israeli relay qualified, and then quietly swim off into the sunset. But the former Stanford Cardinal standout gave her career a second wind this season of the ISL, trading Israeli 100 free records with Anastasia Gorbenko throughout the year.

Swimming on a roster with Beryl Gastaldello and Abbey Weitzeil, she didn’t get as many chances to swim individual events as she could have, though she did win the 200 free in Match #5 (ahead of Britain’s Freya Anderson, who also had a great season).

If she chooses to make a move for the 2021 season and lands on a team that needs her more as a 100/200 freestyler than a 200/400 freestyler (the Tokyo Frog Kings are a good candidate for that), she’s a top-50 performer in this league.

Gorbenko has been a ‘big deal’ in Israel for a few years now, even at 17. But after a hit-and-miss 2019 ISL season, this year she convinced the world that she’s destined for bigger things internationally.

In addition to breaking many more Israeli Records, she broke multiple European Junior Records multiple times throughout the season.

With long course bests of 2:11.92 and 4:41.48 in the 200 IM and 400 IM, respectively, including that 400 IM swim that came in February just before lockdowns interrupted training and competition, she’s on path to make noise next summer at the Olympics.

In last season’s finale for the New York Breakers, at the DC “American Derby” meet, British swimmer Abbie Wood was last in the 400 IM, 7th in the 400 free, 5th in the 200 IM, and finished 82nd out of 104 participating swimmers in MVP scoring.

The Breakers still had faith to return the diminutive swimmer to their roster for the 2020 season, and that choice paid off big.

Wood scored 121.75 MVP points this season across her team’s 5 meets, which ranked her 3rd among the Breakers – and not far behind Michael Andrew (who swam a lot of races) and Marco Koch (who almost broke a World Record). She also came away with a new British Record in the 200 IM, clearing a record set by Siobhan-Marie O’Connor 5 years earlier.

She was also one of the Breakers’ better performers in the relays, splitting as fast as 52.3 in freestyle and never slower than 52.7.

That the Cali Condors dug up Wang Kuan-hung, known through the ISL season as “Eddie Wang,” might be the deepest GM cut of the 2020 season. At the 2019 World Championships, he placed just 19th in the 200 fly – a good result for a swimmer who was only 17-years old at the time, but not one that would immediately catch the attention of lots of ISL teams.

But Wang became a huge performer for Cali in an event where there was generally a lack of depth in ISL rosters, the 200 fly. He won the event in Match #4 and Match #8, and was 3rd in the final (behind only Chad le Clos and Tom Shields). He twice cleared Daiya Seto’s World Junior Record in the 200 fly, and was the league’s third-fastest performer throughout the season (and was faster than le Clos until the South African perked up in the final to beat Tom Shields).

Wang had a few nice performances in other events as well, including a 3:42 in the 400 free in Cali’s semifinals to place 3rd. He’ll need to continue to build his versatility to reach full value in the ISL, but as a teenager there’s time for that. Any swimmer who can contribute top 3 performances in the 200 fly and 400 free, hard events to fill in the ISL format, will be in high demand.

TRIVIA QUESTION: Who do you think had the fastest 50 freestyle time in the ISL in the 2020 season? Ranomi Kromowidjojo? Sarah Sjostrom? Beryl Gastaldello? The new American Record holder Abbey Weitzeil?

The answer is none of the above. That honor goes to the Breakers’ Kasia Wasick from Match #6, where she swam 23.30. In fact, even going back to the 2019 season, that’s the #2 time in ISL history, just .01 seconds behind Kromowidjojo’s league record (and ahead of swimmers like Bronte and Cate Campbell, who didn’t race in the ISL this season).

She won the 50 free three times this ISL season in what was a continuation of a long course rise that the Polish swimmer has shown since moving to Las Vegas and training at UNLV.

Banic was a late add for Energy Standard. The story has been told many times this season, but Banic, who had made quite a few rounds looking for a team to no avail, was picked up by the super-tuned Energy Standard coaching staff after she swam a late-summer lifetime best in the 100 yard fly in practice.

By the end of the season, she was the American Record holder in the 50 fly. If I told you that in January that Maddy Banic was going to end 2020 as an American Record holder you would’ve told me I was talking nonsense. But Banic, who showed international promise early in her career at Tennessee, took the next step on a long road back from some mental health work this season.

She got her chance when Sarah Sjostrom was hurt with a back injury, and came out of that meet with league-leading times. From there she rolled on. Next season, she’s going to be at the top of a lot of teams’ recruiting lists.

Beata Nelson, one of a big group of rookies that helped carry the Cali Condors to the team title this season, finished 15th in the league this season in MVP scoring. That makes her the 2nd-highest placing newcomer behind Emre Sakci.

It’s possible that Nelson will never make an American Olympic or long course World Championship team. She’s a solid long course swimmer, and she’s young enough to continue developing those skills, but she’s also facing fields in her best events, the backstrokes, where there are really young swimmers like Regan Smith and Phoebe Bacon already rising to occupy those spots, in addition to the established names like Kathleen Baker.

That’s because she has one skill that, in the current iteration of ISL, in short course meters, makes her a queen: she’s one of the best underwater kickers in the world. For those who follow American collegiate swimming closely, her exploits in short course are well known. For those who just follow international-swimming, however, she might have just been a peripheral name previously – one you’re aware of but couldn’t quite pinpoint.

Maybe she will make a big long course US team, and maybe she won’t, but the ISL has opened an avenue for her to continue doing this. And that’s very cool.

In this year’s ISL season, he went toe-to-toe with many of the world’s best breaststrokers, like Adam Peaty, and often times came out on top. In total, he had 9 individual event wins this season and won the final round of skins in Match #7.

After nearly breaking the 50 and 100 breaststroke World Records, he’ll be in the conversations for next summer’s Olympic Games in long course (though we don’t really know yet how well he’ll convert). But where his real value comes in the ISL is that he’s more versatile than the average sprint breaststroker. He split sub-47 on Iron’s free relays, and even made the semi-finals of a butterfly ‘skins’ race. Given the roster limitations in the ISL, having a sprint breaststroker who can contribute in other events becomes super valuable when you do the math on events-per-athlete.

Even without his team qualifying for the finals, he finished 10th in MVP scoring. That put him ahead of his teammate Ranomi Kromowidjojo (13th) as the highest-ranked swimmer without the benefit of finals points.

Read the full story on SwimSwam: 10 Swimmers Who Broke Through in the 2020 ISL Season